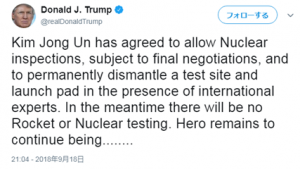 All papers took up a tweet by President Trump on the inter-Korean summit in which he said he was excited about the results. They conjectured that the President appears eager to play up progress on the denuclearization of the Korean Peninsula as one of his key diplomatic achievements ahead of the November midterm elections, adding that he is looking to hold another summit with Kim Jong Un later this year. Asahi claimed that some USG officials are skeptical about the latest denuclearization pact since Kim failed to submit a report describing his entire nuclear development program and a timetable for its dismantling. Asahi and Yomiuri spotlighted Secretary of State Pompeo’s plan to chair a UN Security Council ministerial on North Korea on Sept. 27 where he is expected to urge all member states to enforce existing sanctions.