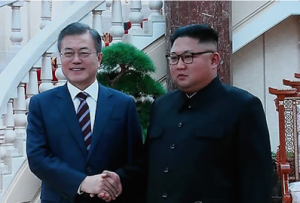 All papers gave prominent front- and inside-page coverage to the third inter-Korean summit this year held in Pyongyang yesterday, highlighting a pledge by Kim Jong Un to permanently shut down a nuclear facility in Yongbyon on the condition that the United States takes “corresponding measures.” President Moon and Chairman Kim also agreed to halt military drills around the DMZ starting in November and arrange a visit to Seoul by the DPRK leader this year. In the Pyongyang Joint Declaration, Kim also promised to permanently dismantle the missile engine test site and launch platform at Dongchang-ri under the observation of experts from relevant countries.

The dailies expressed skepticism about the DPRK leader’s commitment to denuclearization since the shutdown of the Yongbyon complex is conditional. The papers also argued that the dismantlement of the fixed missile launchpad at Dongchang-ri is not militarily significant because North Korea possesses multiple mobile launch platforms. Since Kim effectively dismissed U.S. calls for unconditional denuclearization, the dailies stressed that it remains to be seen whether the latest Korean summit will help jumpstart what the papers characterized as the “deadlocked” nuclear talks between the U.S. and DPRK. The local press also wrote that North Korea is taking a “piecemeal” approach to denuclearization perhaps in a bid to bring the United States to the negotiating table. Asahi suspected that Washington and Tokyo may not necessarily be pleased with the Moon administration’s apparent eagerness to provide economic support to the DPRK despite a lack of tangible progress toward denuclearization.

The national papers also focused on the separate accord reached between the defense ministers of the two Koreas to substantially scale back their military activities on the border to reduce mutual hostility, with Yomiuri conjecturing that the pact served to lay the groundwork for the issuance of a declaration on ending the Korean War. The paper added that with this pact, the DPRK is probably hoping to restrain the U.S. military’s operations in South Korea. Sankei and Yomiuri voiced concern that the U.S.-ROK alliance’s deterrence capability may weaken following the latest inter-Korean summit.