49% back Abe for next LDP president, while 39% back Ishiba, Sankei-FNN poll

The nationwide public opinion poll jointly conducted by the Sankei Shimbun and Fuji News Network (FNN) on Sept. 15–16 probed views on the Sept. 20 Liberal Democratic Party (LDP) presidential election. Some 49.6% of pollees said Prime Minister Shinzo Abe (LDP president) would be appropriate to serve as the next LDP president, exceeding by 10 percentage points former LDP Secretary-General Shigeru Ishiba, who was favored by 39.6%. There was a wider gap between the two candidates among LDP supporters, where 71.4% backed Abe and 23.9% selected Ishiba.

Prime Minister Abe has expressed the intent to aim to have the LDP submit its constitutional amendment proposal to the autumn extraordinary Diet session. Some 51.1% of respondents said they are opposed, exceeding the 38.8% who said they are in favor of it. Among LDP supporters, however, those in favor exceeded those opposed, 57.5% to 30.8%.

Asked which of the constitutional amendments debated in the party presidential election should be given the highest priority, 47.0% said “the addition of a clause on government responses to emergency situations,” making it the most frequently given response. Some 26.9% said “the amendment of Article 9,” and 19.1% said “the elimination of Upper House electoral districts comprising multiple prefectures.”

Russian President Vladimir Putin proposed on Sept. 12 that Japan and Russia “form a peace treaty without preconditions by the end of the year.” Some 81.0% said that the Japanese government should adhere to the principle it has adopted thus far, namely, to form a peace treaty after resolving the matter of the attribution of the four Northern Islands.

A plurality of 66.2% of pollees said that they approve of the government’s handling of the torrential rains in western Japan and the Hokkaido earthquake.

[Polling methodology: The survey was conducted until the calculated number of responses was obtained by placing telephone calls on a random digit dialing (RDD) basis adjusted to the gender and age composition of each survey area. A total of 1,000 men and women, aged 18 and over, across the nation were surveyed. The survey was conducted on Sept. 15–16, 2018.] 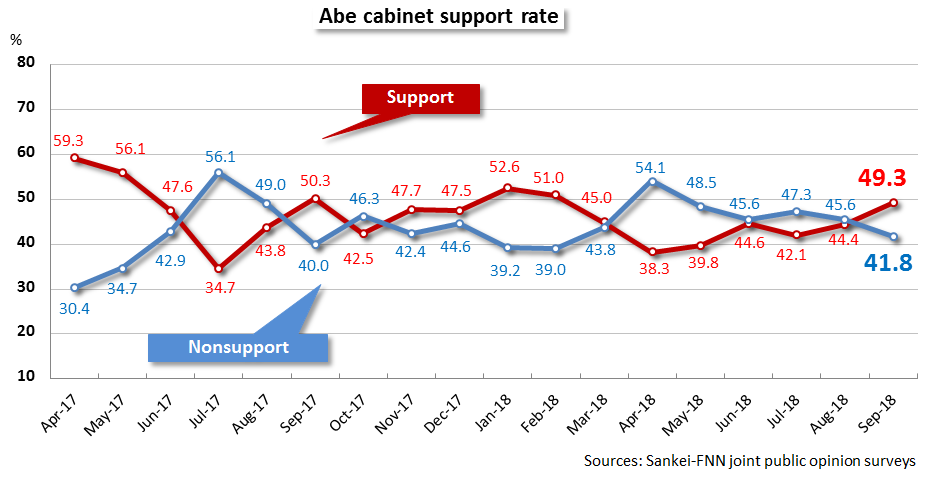