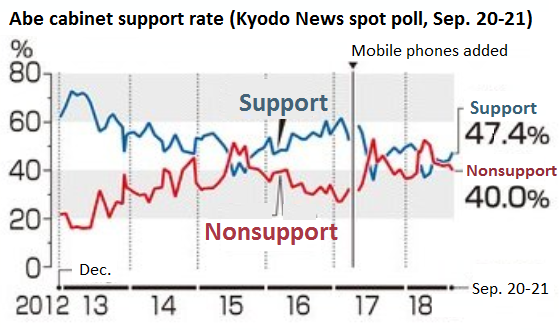 Public support for Prime Minister Shinzo Abe’s Cabinet edged up to 47.4 percent after his re-election as Liberal Democratic Party leader, while half of respondents were against his constitutional amendment drive, a Kyodo News survey showed Friday.

The support rate was 3.2 percentage points higher than in the previous poll in August, according to the telephone survey conducted Thursday and Friday. The disapproval rate for the Cabinet came to 40.0 percent, down 2.4 points.

The survey showed 51.0 percent of respondents were opposed to Abe’s plan to submit proposals to amend Japan’s pacifist Constitution to an upcoming extraordinary Diet session in the fall, while 35.7 percent were in favor.

As to Abe’s dominance in the decision-making process, which he has cemented during his nearly six years in office, 57.4 percent viewed it as problematic, while 33.6 percent said they see no problem.

Abe has sought to clarify the legal status of the Self-Defense Forces in the war-renouncing Article 9 of the supreme law to end arguments that the Japanese troops are “unconstitutional” as many legal scholars insist.

But only 29.7 percent welcomed Abe’s third consecutive term as LDP president, which amounts to Japan’s leader as the party and its junior coalition partner Komeito party control both houses of the Diet. On the other hand, 24.9 percent did not welcome another three-year tenure for Abe, while nearly half of the respondents, 44.7 percent, said they cannot say either way, according to the survey.

In the LDP leadership election, Abe secured 553 votes in comparison with Ishiba’s 254. Of 807 total valid votes, Abe gathered 329 out of ballots cast by Diet members while obtaining 224 by rank-and-file party members. Ishiba collected 73 from lawmakers but put up a good fight among ordinary members, attracting 181 votes.

At a press conference following his victory in the LDP race, Abe expressed hope that the party would accelerate its preparations to submit the constitutional revision proposals to the upcoming parliament session.

The constitutional issue, in particular how to deal with Article 9, was a major topic during the LDP leadership election. Ishiba had proposed a more drastic change, but modified his stance to say that Article 9 was not a priority amid a lack of public understanding.

Revising the supreme law is seen as difficult because proposals need to be approved by two-thirds of both chambers of parliament and a majority in a national referendum. The Constitution has not been rewritten since it took effect in 1947 under the U.S.-led postwar occupation.

Asked about what the Abe Cabinet should tackle, 41.1 percent cited pensions, and medical and nursing care, 39.9 picked economic policies, and only 7.2 referred to constitutional amendments. The respondents were allowed to select two items in the question.

The survey also showed 54.1 percent said they were opposed to a planned consumption tax hike in October next year to 10 percent from the current 8 percent, while 41.2 percent were supportive.