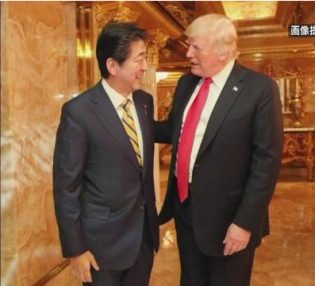 All networks reported at noon that President Trump and Prime Minister Abe ate dinner together at the Trump Tower in New York on Sunday. PM Abe told reporters afterwards: “On North Korea we agreed to accelerate the momentum created at the historic U.S.-DPRK summit in June and to continue to work together toward the denuclearization of the Korean Peninsula.” Regarding the abduction issue, the premier reportedly said he delivered messages to the President from the families of the abductees whom he met before his departure for the U.S. and that he is determined to confront Chairman Kim and take every opportunity to work on the issue. He was also quoted as saying: “We had a very constructive discussion on the issues of commerce, investment, and trade, as well as ‘FFR.’ In any case, Minister Motegi will meet with USTR Lighthizer on these issues, and we will talk about them again at the upcoming summit.”

Meanwhile, Fuji TV reported that Japan is planning to reach an agreement with the U.S. on launching a new venue for trade talks by hinting at the possibility of lowering tariffs on U.S. agricultural products to the levels of the TPP, adding that attention will be focused on whether this will allow Japan to skirt President Trump’s hardline policies.