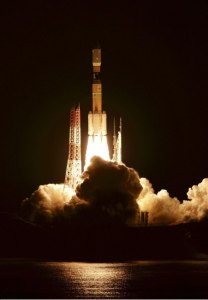 About 15 minutes after the launch, the Kounotori 7 separated from the H-2B Launch Vehicle No. 7 and entered into the planned orbit, the Japan Aerospace Exploration Agency said.

Sunday’s launch marked the seventh consecutive successful takeoff of an H-2B rocket. The Kounotori 7 is scheduled to dock at the ISS on Thursday evening.

Along with daily necessities such as space food and clothing, the Kounotori is loaded with a small reentry capsule weighing about 180 kilograms, which will be used to bring test samples from the ISS back to Earth. It also carries lithium-ion batteries that can be used as power sources for the station as well as three CubeSats to be released from the ISS.

The cargo carried by the Kounotori weighs about 6.2 tons, the heaviest load ever handled by such a spacecraft.

The launch was initially scheduled for Sept. 11 but was postponed four times due to bad weather and an abnormality in a valve that adjusts pressure in the rocket’s liquid oxygen tank.