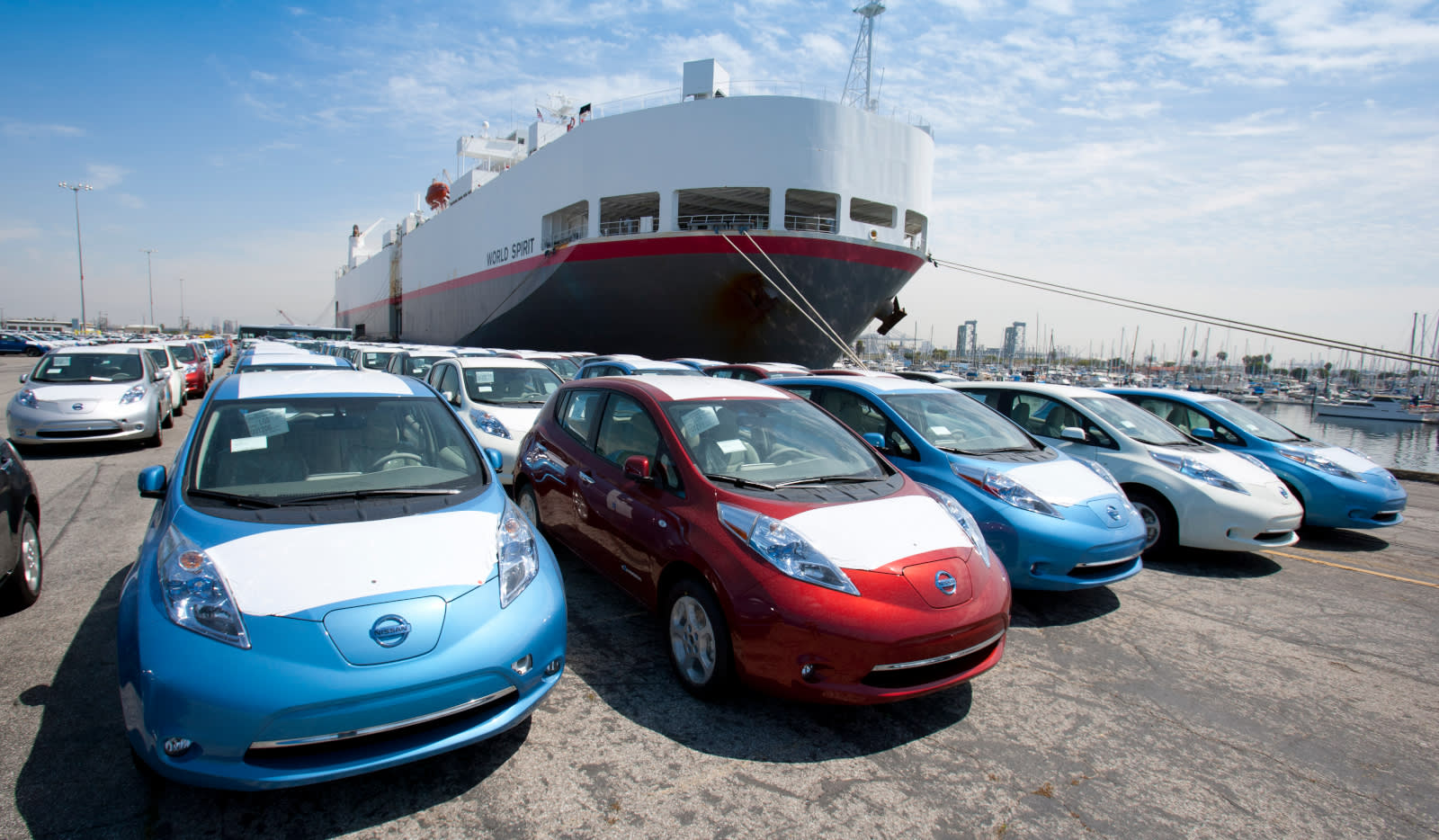 Nissan cars sit in a processing lot at the Port of Los Angeles after being off-loaded from a car carrier ship. The cars are from a Kaminokawa factory in Tochigi, Japan. (Getty Images)

TOKYO — Japan will soon restart trade talks with the U.S., this time more inclined to accept the Trump administration’s preferred bilateral format for discussing tariffs, out of a belief that two-way negotiations are a better strategy for keeping Washington at bay over additional duties on Japanese automobiles.

Japan’s priority is to prevent the trade war from reaching its shores. The U.S., China and Japan are the world’s three largest economies. The global economy would be severely derailed if Tokyo is dragged into a China-style trade conflict with Washington.

The importance of Japan-U.S. trade talks extends beyond economics. Discord between the two allies would affect the security situation in East Asia, starting with North Korea.

Tokyo has apparently found a domestically palatable means of taking Washington up on its offer of bilateral tariff negotiations. Until now, Abe has explained to lawmakers that the current FFR talks are neither negotiations on a free trade agreement nor preliminary discussions toward one. U.S. President Donald Trump and Japanese Prime Minister Shinzo Abe will sit down Sept. 26 to discuss a deal that would prevent Washington from imposing additional tariffs on Japanese cars.

This makes it difficult to frame the bilateral tariff talks as being for a U.S.-Japan FTA. The logic emerging in the Japanese government is to position the bilateral talks as paving the way for the U.S. to return to the Trans-Pacific Partnership.

Tokyo is modeling its strategy on the European Union’s recent trade talks with the U.S. Washington agreed in late July to hold off on auto tariffs, sparing Brussels higher American duties. The deal can be considered a case of bilateral negotiations smoothing over trade talks.

Following the EU’s lead, Japan will have Motegi and Lighthizer hammer out details first. The agenda will likely include tariffs on items like farm products, nontariff barriers for autos, and drug pricing. Intellectual property rules are also expected to be discussed.

Entering into tariff negotiations will be preconditioned on the U.S. freezing additional auto duties. Japanese carmakers stand to lose half their profits if Trump goes through with his threatened 25% tariff. Many in the Japanese government believe that a meeting will take place only if Washington commits to shelving the tariff.

Agricultural tariffs will be another focal point. The EU was able to draw a cease-fire by proposing a plan to eliminate tariffs and nontariff barriers on industrial products. While Tokyo has few conflicts with Washington in that area, the U.S. has longed to open up the Japanese market for farm products.

The U.S. and Japan engaged in heated discussions over beef, pork and rice in the TPP negotiations from 2013 to 2015. Tokyo ultimately acceded to Washington’s demand for an import ceiling on duty-free rice that failed to materialize once Trump pulled out of the unratified pact in 2017. American demands to lower tariffs have since only grown stronger.

Abe is approaching a reduction in agricultural duties carefully, saying he will not lower them below TPP levels. Staying within that range will make it easier for him to convince domestic agricultural groups that the situation is equivalent to the U.S. rejoining the TPP.

Reducing tariffs below TPP levels would certainly draw backlash from agricultural organizations and impact important elections for single-seat constituencies in the upper house next year.

The U.S. has already reached a basic deal with Mexico to revise the North American Free Trade Agreement and is renegotiating NAFTA with Canada. Washington has also made South Korea agree to limit steel product exports to the U.S., for example.

But even if Tokyo agrees to discuss agricultural duties, there is no guarantee that Washington will be satisfied. Japan, which has focused on buying time, risks being left behind.

The trade talks are also linked to Trump’s relationship with Abe, who has just won a third three-year term. Although the prime minister hopes that meeting with the American president will ease tensions, he also directed economic agencies this month not to leave all trade talks to the prime minister. Plans to play golf with Trump were canceled to avoid criticism.

When campaigning for re-election as president of the ruling Liberal Democratic Party, Abe vowed to take stock of Japan’s postwar foreign policy — whose foundation is the alliance with the U.S.