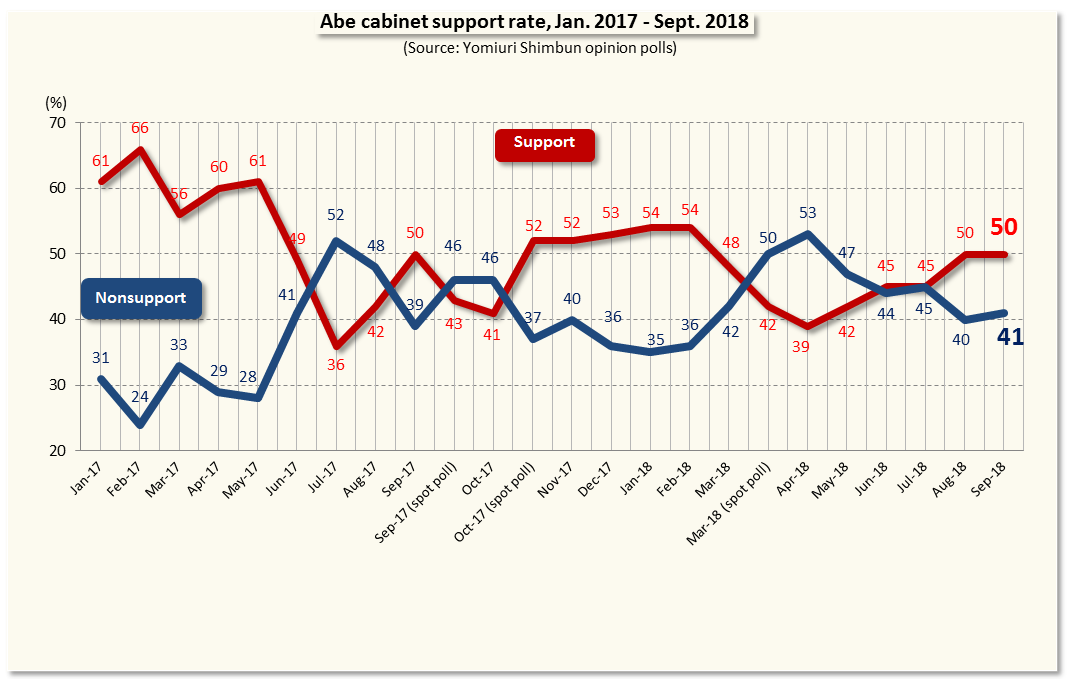 The Yomiuri Shimbun’s nationwide public opinion poll conducted on Sept. 21–23 found the Abe cabinet support rate at 50%, unchanged from the previous poll conducted on Aug. 24–26. The nonsupport rate was 41% (previous poll: 40%). Respondents were split over Shinzo Abe’s winning a third consecutive term as Liberal Democratic Party (LDP) president, with 46% saying it is good and 41% saying it is not. Asked for their views on the fact that Abe won 553 votes to Ishiba’s 254 votes, 49% of pollees said “it would have been better if Ishiba had won more votes,” while 39% said “the number of votes won by each candidate was just right,” and 6% said “it would have been better if Abe had won more votes.”

Prime Minister Abe plans to submit the LDP proposal of constitutional amendments to the extraordinary Diet session this autumn. Some 51% said they are “opposed” to this, exceeding the 36% who said they are “in favor.”

Asked for their views on the LDP proposal that the grounds for the Self-Defense Forces (SDF) be added to Article 9 of the Constitution, some 39% said they are in favor of the amendment, down from 45% in the previous poll, while 43% said they are opposed, up from 38%. With this, those opposed exceed those in favor, a change from the August poll findings. This is the first time those opposed have made up the majority in the five times that the question has been asked since it was first asked in the March 2018 poll.

Some 34% of respondents (35%) said that they approve of the Abe cabinet’s plan to relocate the U.S. military’s Air Station Futenma in Okinawa to the Henoko district of Nago City, which is also in Okinawa. Meanwhile, 47% said they disapprove (48%).

[Under the “Hometown Tax Donation” system, taxpayers can choose to pay a certain proportion of their local tax – in essence, “donate” – to a city, prefecture, or municipality of their choice. In return, taxpayers are exempt from a portion of their income and resident taxes. In addition, the public bodies that receive the tax donation give in return a gift.] The Ministry of Internal Affairs and Communications plans to eliminate from the tax-exemption scheme those local governments whose gift procurement costs exceed 30% of donations or whose gifts are not locally produced. Those “in favor” of this policy exceeded those “opposed,” 54% to 34%.

[Polling methodology: The nationwide survey was conducted on Sept. 21–23 on a computer-aided random digit dialing (RDD) basis and targeted voters aged 18 or over with calls placed to landline and mobile phone numbers. Valid responses were received from a total of 1,053 persons, including 528 persons (out of the 830 households with one or more eligible voters) for landline numbers and 525 persons (out of the 1,215 persons who answered) for mobile numbers. The valid response rates were 64% for landline numbers and 43% for mobile numbers.]