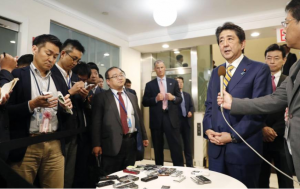 While the U.S. takes aim at China, Canada and Mexico over perceived trade imbalances, Japan has kept a low profile, hoping Prime Minister Shinzo Abe’s friendship with golf buddy Donald Trump will keep Tokyo out of the firing line.

But as Abe and Trump hold talks touching on trade frictions, there are signs Japan could be next in the U.S. president’s sights, with its greatest fear being higher tariffs on cars.

Trump has frequently grumbled about a “very high deficit” with Japan, the world’s third-biggest economy.

In comments to the Wall Street Journal, he stressed his good relations with the Japanese, before adding menacingly: “Of course, that will end as soon as I tell them how much they have to pay.”

The deficit amounted to $40 billion in the first eight months of this year, according to official U.S. statistics.

Vehicle and parts exports from the auto sector account for 80 percent of the imbalance, and it is the sight of “millions of Japanese cars” on American roads and few U.S. brands being driven in Japan that raises Trump’s hackles.

That has little to do with tariffs. In Japan, where most people use public transport despite an extensive road network, no duties are imposed on imported cars. The giant United States, however, imposes a levy of 2.5 percent.

Analysts say that, with their larger sizes, U.S. vehicles are not well suited to Japanese roads or the tastes of its consumers.

Critics argue, however, that Japan imposes a raft of nontariff barriers — including what they say are overly rigorous safety standards — that make importing cars difficult.

How are talks going?

Initial negotiations between U.S. Trade Representative Robert Lighthizer and Japanese counterpart Toshimitsu Motegi have already taken place without a breakthrough, and a second round was expected later Monday.

The two sides have opposing points of view: Tokyo wants to settle trade disputes in a forum like the Trans-Pacific Partnership, a multination trade pact, whereas Washington wants a bilateral deal.

Tokyo may accept the bilateral approach if Washington holds off on imposing additional tariffs on its auto sector.

For the moment, hostilities have not broken out in earnest but this could soon change, said IHS Markit economist Harumi Taguchi.

“It is highly likely that Donald Trump will move his focus to Japan once he reaches some settlement or deal regarding U.S. trade tensions with China and NAFTA talks,” said the analyst.

“The Trump administration’s most effective weapon in talks with Japan remains the threat to impose tariffs of up to 25 percent on automobile imports on national security grounds,” said Tobias Harris from Teneo Intelligence.

Such a move would have a “considerable” impact on the Japanese economy, he added.

Car giants like Toyota and Nissan sell millions of cars in the United States, many of which are produced elsewhere — for example in Japan, Mexico or Canada.

Taguchi said a 25 percent tariff could cut Japan’s GDP by as much as 0.5 percent.

Manufacturers have already warned they will be unable to absorb the cost. They say it will be passed onto U.S. consumers, which in Toyota’s case might mean paying an extra $6,000 per car.

Trump will probably demand that more Japanese cars be made in the U.S., but room for maneuvering is limited. Japanese companies already produce nearly 4 million units per year in the U.S. and employ 1.5 million workers there, Taguchi said.

A China-style tit-for-tat tariff battle is also unlikely, as Abe has already said such a move would benefit nobody.

Instead, Japan will probably petition the World Trade Organization, as it threatened to do when the U.S. imposed steel tariffs.

What Abe should do is promise to increase purchases of “shale gas, military items and some other items that will not substantially affect domestic production,” Taguchi said.

However, this is not likely to prove sufficient and Abe will have to use his negotiating skills.

If Japan offers a “satisfactory package of concessions on market access in the near term, particularly one that included agricultural concessions,” it might escape Trump’s wrath, said Harris.

But this is a very sensitive subject for Japan, which already has tariffs in place to protect its farmers.