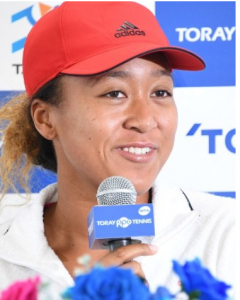 Following her victory in the women’s singles in the US Open Tennis Championships, Naomi Osaka came in second at the Toray Pan Pacific Open Tennis Tournament held in the Tokyo suburban city of Tachikawa. Her spectacular performance on the court has sparked debate on identity and what constitutes a Japanese person. Is this the beginning of a process, at the end of which biracial and multiracial people will no longer be bullied for their looks or names, or called “gaijin” — a term at times used pejoratively to refer to foreigners?

“I’m sorry, but people who say Naomi Osaka is Japanese or call her the pride of Japan make me sick. You can’t just embrace ‘hafu’ (biracial people) as Japanese when it suits you. You normally discriminate against us,” tweeted @phie_hardison, a 26-year-old woman who has an American father and a Japanese mother, on Sept. 9. The tweet had been retweeted nearly 13,800 times as of Sept. 24.

“It seemed to me like the very television broadcasters who usually get laughs by using ‘hafu’ as the butt of jokes began to praise (Osaka) as ‘the pride of Japan,’ and people who usually discriminate even made an about-face, saying they were ‘happy (about Osaka’s win) as a Japanese,” the woman told the Mainichi Shimbun.

She also said that she had trouble getting a job with her non-Japanese name, but as soon as she went to a family court to have her name changed to a Japanese one, she passed a written employment test. “I’m sure there are a lot of ‘hafu’ out there who’ve been encouraged by Osaka’s success.”

According to the Ministry of Health, Labor and Welfare, the number of those who have one parent with non-Japanese citizenship account for about 1.9 percent of the total number of newborns in Japan. That’s one in every 50 newborn children.

Filmmaker Megumi Nishikura, 38, who lives in the U.S., was born to a Japanese father and an American mother of Irish descent. In 2013, she co-directed a documentary called “HAFU” that captured the lives of biracial people. Nishikura, who hopes that Osaka’s presence and success will bring changes to preconceived notions of identity in Japanese society, thinks that if the tennis player had grown up in Japan, she may have been treated as a foreigner.

So what does Osaka herself think about her roots, which span Japan, Haiti and the U.S.? In an Aug. 23 New York Times article, she said, “Maybe it’s because they can’t really pinpoint what I am, so it’s like anybody can cheer for me.”

At a news conference in the U.S. the following day, Osaka told reporters that she felt that there were biracial children who had read the article who respected her, and that she wanted to be known as someone children respected. At a press conference she held on Sept. 13 when she arrived in Japan for the Toray Pan Pacific Open, she said, “I’m just me.”

Sociologist Lawrence Yoshitaka Shimoji, who researches “hafu,” has heard from many biracial people of their experiences of being bullied, facing discriminatory employment practices, being stopped and questioned frequently by police, and the pain of being asked repeatedly whether they were really Japanese.