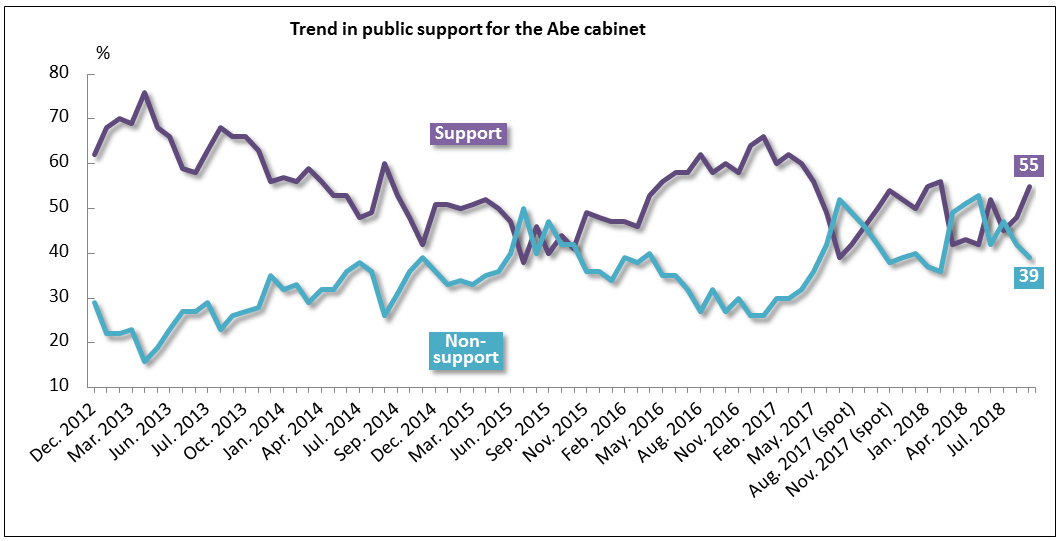 Support for Prime Minister Shinzo Abe has finally recovered from a land sale scandal that has rocked the government for months, though nearly half the public still questions the leader’s trustworthiness.

In a weekend survey conducted by Nikkei and TV Tokyo, 55% of respondents said they approved of the Abe cabinet — up 7 points from the last survey in late August.

This is the highest figure since the 56% marked in February, before Finance Ministry officials admitted to doctoring documents tied to a heavily discounted sale of government land to Moritomo Gakuen — a school operator run by Abe’s personal friend.

Cabinet disapproval fell to 39% from 42% in late August.

When asked about Abe winning a third consecutive term as the ruling Liberal Democratic Party’s president last Thursday, 55% said they were happy with the outcome, while 38% were unhappy.

Greater support for Abe seems to be a boon for his party as well. Approval for the LDP increased 3 points to 48%. Meanwhile, 32% of respondents identified as independents.

But the poll also revealed the public’s deep-rooted concern about Abe over the Moritomo scandal. While 57% said they trusted the prime minister, 41% said they did not. Cabinet approval among independents stood at about 30%, much lower than among all respondents.

Stronger social welfare topped the list of issues voters thought Abe should prioritize in his third term, coming in at 49%. This was followed by economic recovery at 45%, better education at 31%, and diplomacy and national security at 30%. Interest in constitutional change, one of Abe’s long-term ambitions, stood at a mere 13%. Respondents were allowed multiple answers in this section.

Regarding trade, 76% said he did not need to respond to demands by U.S. President Donald Trump to address the trade imbalance between the two countries. Both Abe’s supporters and critics agreed on this, with 73% of those who approved of the cabinet and 82% of those who did not dismissing Trump’s demands. Overall, only 12% thought Abe needs to respond.

Japan’s planned consumption tax hike proved a much more divisive topic. Forty-seven percent of respondents agreed with Abe’s plan to raise the rate to 10% from 8% in October 2019, while 48% opposed it. Among the cabinet’s supporters, 54% were for it while 42% were against. The scales tipped among those who did not support the cabinet, with 39% for the tax increase and 57% against it.

The survey, which used random-digit dialing, drew 973 responses from those 18 or above, and had a response rate of 46.4%. 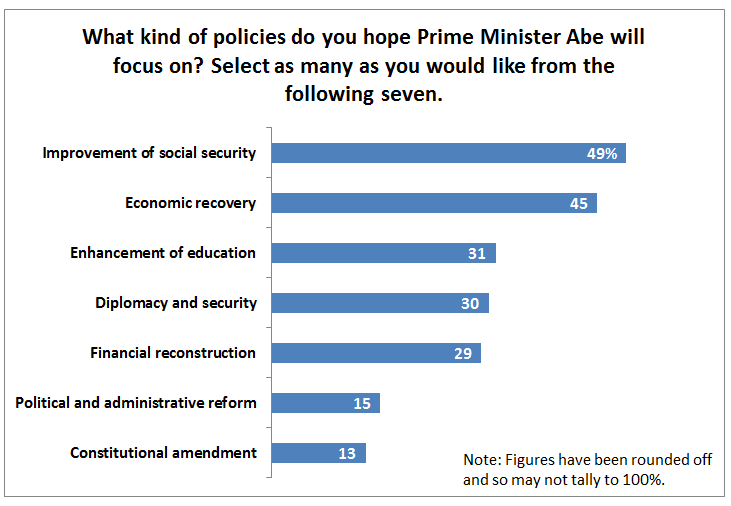