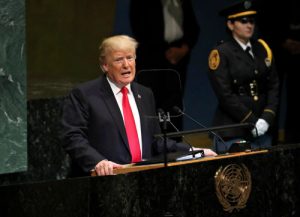 All national dailies reported extensively on President Trump’s speech at the UN General Assembly on Tuesday. The papers wrote that the President emphasized his administration’s achievements including the expansion of the U.S. economy. The President expressed confidence that progress is being made in denuclearization but added that much work remains to be done and sanctions will remain in place until denuclearization is achieved. The papers also wrote that the President condemned China for its unfair trade practices and criticized Iran for supporting militant groups in the Middle East, urging other nations to cooperate with U.S. sanctions on Tehran. Sankei wrote that the President thanked Prime Minister Abe, South Korean President Moon, and Chinese President Xi for their cooperation in applying pressure on North Korea.