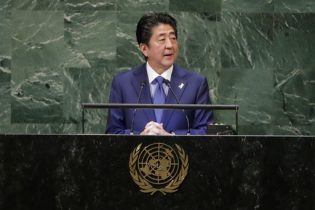 NHK reported this morning that Prime Minister Abe addressed the UN General Assembly and expressed his resolve to strengthen the free trade system over the course of the next three years of his term in office. The premier reportedly said: “In the three years to come, I will do my very best to strengthen the free trade system. I will likewise do everything in my power to clear the postwar structure from Northeast Asia.” Abe also reportedly expressed resolve to make all-out efforts in the RCEP negotiations by saying: “I have at times risen above intense debates domestically, waving the flag of free trade… I must drive my efforts up a notch, aiming still farther into the distance.” In addition, the premier reportedly expressed his intention to place emphasis on the FFR talks with the U.S. by saying: “For many years, the United States and Japan have led the free trade system forward internationally…. I intend for Japan and the U.S. to continue to maintain a win-win relationship.”

Meanwhile, on North Korea, the premier reportedly said: “Japan’s policy seeking to settle the unfortunate past and normalize relations with North Korea once the abduction, nuclear, and missile issues are resolved will not change. However, I must reiterate one thing time and time again: We will bring about the return of all Japanese abductees. I am determined to make this a reality.” He went on to say: “I am also ready to break the shell of mutual distrust with North Korea, get off to a new start, and meet face-to-face with Chairman Kim Jong Un…. If we are going to hold a summit, then I am determined it must be a meeting that contributes to a resolution of the abduction issue,” he added.