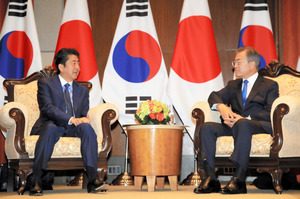 All Wednesday evening papers reported on Prime Minister Abe’s meeting in New York on Tuesday with South Korean President Moon, who briefed the premier on the results of the inter-Korean summit held in Pyongyang last week. Moon told Abe that he conveyed to DPRK leader Kim Jong Un the prime minister’s desire to hold a summit. In reply, Chairman Kim reportedly said: “I am ready to hold dialogue with Japan at an appropriate time to improve bilateral relations.” Asahi wrote that Abe had asked Moon to convey to Kim his message that they should meet directly to resolve the abduction issue and North Korea’s nuclear and missile development. According to Yomiuri, the South Korean president concurred with Abe’s opinion that economic sanctions must be maintained in order to urge Pyongyang to take concrete steps toward denuclearization.

In a related development, NHK reported on Japan’s reaction to Chairman Kim’s alleged interest in beginning dialogue with Japan, quoting Chief Cabinet Secretary Suga as telling the press this morning: “In the New York summit with the prime minister, President Moon explained that as requested by the premier, he conveyed to Chairman Kim the importance of resolving the abduction issue and Tokyo’s view on relations with Pyongyang. However, I would prefer not to comment on the details of this diplomatic exchange, including Kim’s response…..No decision has been made on holding a summit between Japan and North Korea at this moment. Prime Minister Abe will hold talks with Chairman Kim in the end, but such a session must be conducive to settling the abduction issue.”