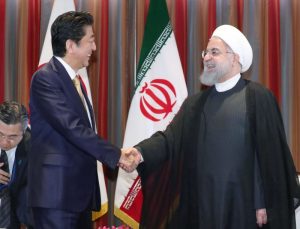 Nikkei wrote that Prime Minister Abe held talks with Iranian President Rouhani in New York on Wednesday and expressed Japan’s support for the Iran nuclear accord irrespective of the U.S. withdrawal from it. The Iranian leader responded by asking the PM for continued cooperation in maintaining the pact. The two leaders also reportedly exchanged views on U.S. demands to halt imports of Iranian petroleum. The daily wrote that Tokyo has been put in an awkward position in dealing with Tehran on account of the strong criticism leveled against Tehran by the Trump administration, explaining that the GOJ did not disclose to the press what the two top officials said with regard to President Rouhani’s invitation for Abe to visit Iran. According to the article, some GOJ officials believe it will be difficult for Abe to go to Iran in the near future in view of the escalated animosity between Washington and Tehran.