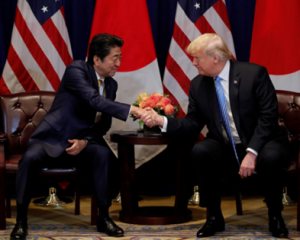 NHK reported this morning that President Trump and Prime Minister Abe agreed during their summit in New York on Wednesday to enter into bilateral trade negotiations, including on tariffs on agricultural products, in order to conclude a Trade Agreement on Goods (TAG). The network said the two leaders also confirmed that the U.S. will not raise tariffs on Japanese auto imports while the trade negotiations are taking place. The network showed the President saying: “We’ve agreed today to start trade negotiations between the United States and Japan. This was something that for various reasons over the years Japan was unwilling to do, and now they are willing to do, so we’re very happy about that. I’m sure we will come to a satisfactory conclusion.” The network then showed PM Abe saying: “I understand that Minister Motegi and USTR Lighthizer had a wonderful discussion. Based on that result, I look forward to having constructive discussions on how to further strengthen the U.S. and Japanese economies.”

The network reported that the two leaders said in a joint statement that they reaffirmed their “determination to further expand trade and investment between the United States and Japan” as well as to “realize free, fair, and open development of the global economy.” The network also highlighted that the joint statement says, “For Japan, with regard to agricultural, forestry, and fishery products, outcomes related to market access as reflected in Japan’s previous economic partnership agreements constitute the maximum level,” interpreting this to mean that Japan will not make greater concessions in agriculture than what it has already agreed to under the TPP and other trade agreements.