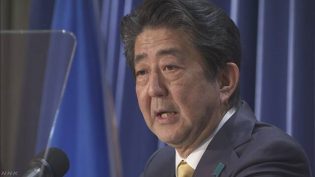 NHK reported this morning that Prime Minister Abe held a press conference after the U.S.-Japan summit and announced that he agreed to begin negotiations with the U.S. to conclude a Trade Agreement on Goods (TAG) and explained that Japan will not make greater concessions in agriculture than what it has already agreed to under the TPP and other trade agreements. He also explained that the U.S. will not raise tariffs on Japanese auto imports while the negotiations are going on. The network also showed the premier saying: “These TAG negotiations are completely different from the comprehensive free trade agreements Japan has concluded in the past.” In addition, the network showed the premier saying with regard to China: “We also confirmed in our joint statement the strong determination of President Trump and myself to expand U.S.-Japan cooperation against unfair trade practices in various sectors including e-commerce and intellectual property rights.” On North Korea, the premier said: “I am determined to resolve the abduction, nuclear, and missile issues, address the unfortunate past, and normalize diplomatic relations with North Korea.”

An NHK reporter said since the GOJ’s focus at the summit was how to prevent the U.S. from raising tariffs on auto imports and negotiations on tariffs on agricultural products, there is now “a sense of relief” within the government since it was able to head off the worst-case scenario. He added, however, that since the U.S. may make tough requests of Japan, Tokyo may be forced to take measures to address a difficult situation in future negotiations. Noting that a trade agreement on goods is different from a comprehensive FTA, an NHK commentator said that Japan helped President Trump save face by agreeing to enter bilateral talks on a limited sector of trade. She also said Japan was able to have its demands accepted because it has already concluded agreements such as a Japan-EU EPA and the TPP.

Meanwhile, TV Asahi reported that some within the GOJ are concerned that Japan has agreed to enter bilateral trade talks with the U.S., saying that although the GOJ thinks it was able to protect Japanese farm products, some GOJ officials voiced concern that the latest development will be “extremely painful for Japanese farmers.”