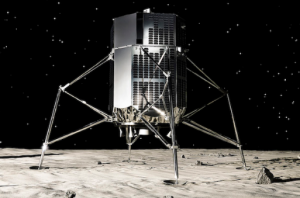 TOKYO — Japanese startups aiming to tap resources on the moon and beyond are making strides, with a company dubbed Ispace signing a deal to launch the country’s first privately funded lunar mission in 2020.

Tokyo-based Ispace said Wednesday that it reached an agreement with American billionaire Elon Musk’s Space Exploration Technologies, known as SpaceX, to send its spacecraft to the moon. SpaceX’s Falcon 9 rocket will carry an Ispace probe into orbit around the moon in mid-2020, followed by another mission in mid-2021 to land on the surface.

“We picked SpaceX based on its track record of launches and costs,” Ispace CEO Takeshi Hakamada said. “We plan to keep looking for opportunities like lunar surface transport services and resource exploration.”

The Japanese company will search for water and other resources on the moon. If hydrogen and oxygen can be produced from water on the moon, they can be used to fuel spacecraft and significantly advance such endeavors as moon travel, planetary exploration and satellite launches.

Startups such as Ispace are also bringing big investors on board. Large companies like the swift pace of development at startups, while also viewing the companies as a buffer in the risky space business.

Funding for space startups grew at a particularly rapid clip last year, reaching 15.8 billion yen, up more than threefold on the year, according to Japan Venture Research.

The Japanese government is jumping on the bandwagon, with plans to invest 100 billion yen in startups in the field. Other countries are also ramping up efforts in the race to outer space. The U.S. is aiming to send a manned mission to Mars in the 2030s, bolstering exploration of the moon, which is expected to serve as a stopping point for travel to the red planet.

China plans to launch a lunar exploration rocket as early as this year, and Germany and India are major players as well. One estimate has the space business worldwide tripling to around $1 trillion by the 2040s.

Investment in the field may be overheating, some caution. A reorganized Japanese public-private investment fund relaunched Tuesday will carefully assess startups, the head of the fund said.