Ambassador Hagerty says U.S. will not raise tariffs on autos while trade talks are ongoing 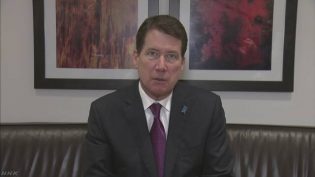 NHK reported on its website on Thursday that Ambassador Hagerty held a press conference after the U.S.-Japan summit held in New York on Wednesday during which he welcomed Japan’s decision to begin bilateral trade talks with the U.S. by saying that this was something he and President Trump were personally hoping for. On the possibility of the U.S. raising tariffs on Japanese autos, the Ambassador reportedly said: “As long as we’re making progress and moving in the right direction, we will forestall any action that would be inconsistent with the progress.” Meanwhile, on the possibility of the U.S. returning to the TPP, the Ambassador reportedly said: “The odds of the United States returning to the TPP are extremely limited if not zero.” The Ambassador also reportedly disclosed that the two leaders discussed the abduction issue and explained that the President understands its importance. NHK-BS’s regular news program “Kokusai Hodo 2018” on Thursday evening also reported that Ambassador Hagerty stressed that measures to raise tariffs on Japanese autos will not be invoked while the trade negotiations are taking place.