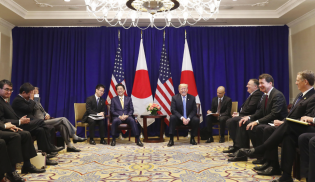 All national dailies gave top play to the summit meeting held between President Trump and Prime Minister Abe on Wednesday in New York, during which the two leaders agreed that the United States and Japan will enter into bilateral negotiations on a Trade Agreement on Goods (TAG). The papers speculated that the two nations will begin the talks at the beginning of next year or later. Yomiuri wrote that the U.S. and Japanese governments are making arrangements for USTR Lighthizer and Economic Revitalization Minister Motegi to hold preparatory talks on the TAG negotiations in November.

Asahi speculated that although Japan had tried to put off responding to the United States’ demand to hold bilateral trade negotiations by proposing the ministerial talks on “free, fair, and reciprocal” trade as a new negotiation framework, it was eventually forced to agree to enter TAG talks following Washington’s announcement in May on the possibility of imposing high tariffs on auto imports. The paper also claimed that although Abe stressed at a post-summit press conference that the TAG talks are “different from comprehensive FTA negations,” there is no difference between the two frameworks in reality. The paper noted that although Abe told the press on Wednesday that he “confirmed” with the President that Washington will not raise tariffs on Japanese auto imports while the TAG negotiations are going on, the joint statement only says that the United States and Japan will refrain from taking measures against the spirit of the statement. The paper conjectured that President Trump could still indicate the possibility of imposing high tariffs on auto imports again in the future if he is not satisfied with progress in the TAG negotiations.

Nikkei expressed the view that although the GOJ succeeded in avoiding additional tariffs on autos for the time being by agreeing to launch TAG negotiations, the Trump administration may make further demands in the upcoming bilateral talks. The paper conjectured that Tokyo had no choice but to enter into bilateral negotiations with the United States to avoid the possibility of Washington raising tariffs on auto imports and that the extent to which the United States will step up its pressure on Japan to open up its agricultural and other markets remains to be seen.

Mainichi opined that it is possible that the TAG negotiations will turn into “FTA talks” in the future because the United States and Japan are planning to discuss investment rules and services following the conclusion of the tariff talks. The paper expressed the view that it is too early for optimism because Japan may be unilaterally forced to make concessions depending on the progress made in the TAG talks.

Yomiuri conjectured that the TAG negotiations will probably be tough because Washington will likely ramp up the pressure on Tokyo to open up its markets.

Sankei speculated that Prime Minister Abe probably agreed to launch TAG negotiations with the United States based on the view that continuing to put off responding concretely to U.S. demands on trade could have had an adverse impact on U.S.-Japan cooperation on North Korea’s denuclearization and resolving the abduction issue. The paper wrote that Japan’s negotiation skills will be tested because the Trump administration may urge Tokyo to make concessions in the TAG talks.