Japanese language sees resurgence in U.S. / Not only pop culture but other factors behind the increase

With broad smiles on their faces, American and Canadian high school students excitedly played the Japanese karuta card game at the National Olympics Memorial Youth Center in Shibuya Ward, Tokyo, at an event in July.

The event was held as part of the KAKEHASHI Project, a youth exchange program supported by the Foreign Ministry. Organizers invited about 50 students from the United States and Canada who took part in this year’s Japan Bowl, an international Japanese language and culture competition for high school students. About 200 students took part in the event in the United States this year.

Margaux Gackiere, the grand prize winner of the contest, said she became interested in Japanese through her interest in traditional Japanese culture. “I want to keep on studying Japanese at college,” Gackiere said in fluent Japanese. This month, she entered the University of Edinburgh, where she also hopes to study Japanese art history.

Like Gackiere, more than 80 percent of the Japan Bowl participants this year plan to continue studying Japanese at university, according to a survey by the Japan-America Society of Washington DC, which has been holding the event since 1992 in an effort to encourage students learning Japanese.

Data shows that such efforts are paying off. The New York-based Modern Language Association released a report earlier this year that said the number of students learning Japanese at U.S. institutions of higher education has increased. The report is based on data collected in 2016. 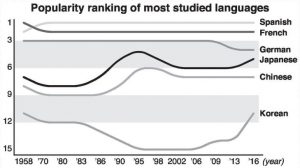 Out of the 15 most commonly taught languages in the United States, including Spanish, French, German and Italian, only Japanese and Korean showed gains in enrollments in U.S. universities and colleges from the previous survey in 2013, whereas overall enrollments in languages other than English fell 9.2 percent, the report said.

“Korean has been steadily growing, Chinese is, in truth, stable; the surprise is the resurgence of Japanese,” Dennis Looney, coauthor of the MLA’s preliminary report, said in an email interview.

Japan’s global economic presence in the 1980s saw a surging interest in the Japanese language and culture in the United States. While the burst of the bubble economy in the early 1990s was followed by declines in the number of learners, the language is apparently gaining popularity in the United States once again.

“Many students became interested in Japanese through anime and Japanese culture,” said Stuart Jones, a Japanese language teacher at Torrance Unified School District in California who was in Tokyo with Japan Bowl participants.

Indeed, 42 percent of the 2018 Japan Bowl participants answered in a survey that they began studying Japanese because of anime and manga, followed by those who cited Japanese culture as the reason for learning Japanese at 28 percent, and those who found Japanese a unique and challenging language at 18 percent.

A recent survey by the Japan Foundation also found that Japanese pop culture such as anime, manga, pop music and fashion topped the list of reasons for American students to learn Japanese for the first time.

Ai Sugisaki of the Japan Foundation in Tokyo believes pop culture is not the only factor behind the resurgence of the Japanese language.

“I think there are various factors. Japan’s economic presence once motivated many people to study the language, but now, the reasons behind people’s interest in the language have diversified,” Sugisaki said.

Ethnic background is certainly one reason. In the United States, California, a state with a large number of Japanese-Americans, tops the list for the number of students learning Japanese, followed by Hawaii, Washington and New York.

Jones, who is from California, said he started learning Japanese because of “a strong feeling of needing to keep the Japanese language going in the family bloodline.”

He rarely heard his grandmother, a second-generation Japanese-American, speak Japanese, and his mother spoke no Japanese, so he “thought it was important that someone could speak Japanese in the family.”

Utah also has quite a few students learning Japanese. Brigham Young University alone has more than 400 undergraduate students learning the language. Japanese is also the heritage language for some local residents due to the existence of the wartime Topaz Relocation Center for Americans of Japanese ancestry.

“We used to have a Japanese town here until 1966,” said Takashi Ebira, associate professor of Japanese at Salt Lake Community College, where about 100 students learn Japanese.

In addition to such historical reasons, Sugisaki pointed to the role of course articulation between secondary schools and colleges, as demonstrated by the College Board’s Advanced Placement (AP) Japanese Language and Culture program, as being behind the Japanese resurgence. The AP program was expanded in 2007 to include Japanese Language and Culture as a subject, allowing college credits, advanced placement or both to be granted for qualifying AP exam grades.

“Students who have taken the AP Japanese program at high schools can get credits at colleges. This system apparently is motivating more students to learn Japanese,” Sugisaki said, adding that the network of teachers at the American Association of Teachers of Japanese (AATJ) has played a significant role.

“The field promotes articulation from the K-12 [primary to secondary] level to the college level through the AP Japanese program,” he added.

Susan Schmidt, executive director of the AATJ, which played a vital role in developing the AP Japanese program, believes that Japanese language education will certainly help deepen the bilateral ties of the two countries.

“I think the success of Japanese language education over the years has had, and will continue to have, an important impact on strengthening the U.S.-Japan relationship,” Schmidt said in an email. She believes that the relationship between the two countries, which has always built on not only business and government ties, but also civil society and personal connections, can only grow stronger as more Americans become familiar with Japan, its language and culture, visit the country and get to know more Japanese people personally.

“Language study is a vitally important part of that process,” Schmidt added.

Experts agreed at the meeting on the need to increase the number of non-native teachers who have connections with and have knowledge on Japan, such as former participants of the Japan Exchange and Teaching Programme.

“The key to solving the problem will be how to nurture the next generation Japanese language teachers,” Sugisaki said.