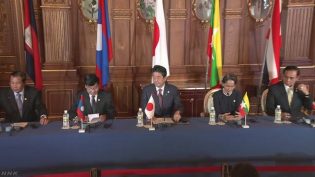 NHK reported at noon on the Mekong-Japan 2018 summit meeting held in Tokyo this morning. The network said Prime Minister Abe met with the leaders of Vietnam, Thailand, Myanmar, Cambodia, and Laos. The network showed the premier saying in his opening speech: “[The Mekong region] is rich in human resources and serves as a land bridge connecting the Pacific and the Indian Ocean….I hope to promote Japan’s cooperation with ACMECS – the economic cooperation framework of the Mekong nations – to realize a free and open Indo-Pacific (FOIP) region.” The network added that the leaders announced the Tokyo Strategy 2018, which calls for the steady implementation of projects such as infrastructure construction, with a focus on developing information and communication technologies as well as roads and railways. The network reported that the strategy also says Japan will support the Mekong nations by developing human resources in fields such as the agricultural and food industries.

In addition, the strategy also says the leaders agreed to continue enforcing UNSC sanctions against North Korea to push for its denuclearization and reaffirmed the importance of securing freedom of navigation, both at sea and in the air, in view of China’s increasing maritime activities in the South China Sea.