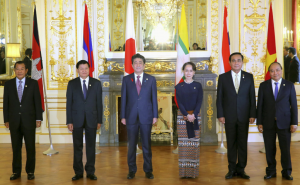 All national dallies wrote that the leaders of Japan and five nations in the Mekong River region held a meeting in Tokyo on Tuesday and adopted the “Tokyo Strategy 2018,” an agreement on strengthened cooperation between their nations. The papers wrote that describing relations between Japan and the Mekong River region as a “strategic partnership,” the document stipulates their goals of strengthening their connections and cooperation in developing human resources and protecting the environment. The nations also confirmed that they will work together to implement a “free and open Indo-Pacific strategy.” Nikkei wrote that while refraining from referring to China by name, the document expressed concern over reclamation and other activities in the South China Sea and included the goal of achieving the complete, verifiable, and irreversible denuclearization of North Korea. Asahi quoted Prime Minister Abe as saying at a post-meeting joint press conference that the Mekong region has potential for growth and prosperity and that the members adopted the strategy to realize a prosperous future together.

In a related development, the papers wrote that Prime Minister Abe held a separate bilateral meeting with Myanmar (Burma) State Counsellor Aung San Suu Kyi on Tuesday and expressed Japan’s continued support for the democratization of Myanmar and its handling of Rohingya refugees.