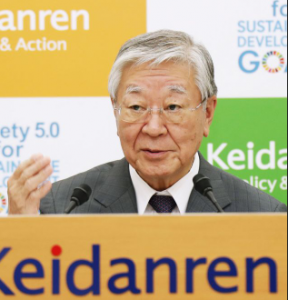 Hiroaki Nakanishi, chairman of the Japan Business Federation, speaks at a press conference in Tokyo on Oct. 9, 2018. (Kyodo)

The guidelines, recommending such as when companies hold job interviews, will be abolished from university students joining the workplace in the spring of 2021, according to the Japan Business Federation, also known as Keidanren.

Current third-year students who will graduate from university in March 2020 will be the last generation to follow the existing job-hunting schedule. In Japan, many companies start their business year from April.

The decision comes after Hiroaki Nakanishi, chairman of the business group, said last month he feels “uncomfortable about Keidanren setting hiring schedule dates,” and expressed an intention to end the long-held practice used when Japan’s lifelong employment and seniority systems were widespread.

The guidelines, designed to allow university students to concentrate on their studies, originally started in the form of an employment agreement in 1953 between the government, universities and businesses.

Under the current guidelines, Keidanren member companies begin holding job orientation sessions in March for third-year students who will be seeking work upon completion of their studies and start the applicant screening process, including job interviews, in June the same year and make formal job offers from October.

Some major Japanese companies have welcomed the change, paving the way for year-round recruitment that is common in the United States and elsewhere as it may allow them to hire capable new graduates earlier.

But university officials are concerned the change could lead to a drawn-out job hunt that would have an adverse effect on students’ studies.

“If there are no guidelines, students will be confused when to start job hunting,” said an official of Ryukoku University in Kyoto.

A 20-year-old student at Toyo University in Tokyo said he believes the current guidelines have helped students balance when to focus on university classes and job hunting.

Though nonbinding, the guidelines have been adhered to many of the business group’s members — mostly major companies.

Meanwhile, non-Keidanren members such as foreign and startup technology companies do not have to follow the guidelines.

Nakanishi, also the chairman of Hitachi Ltd., has said that Japanese companies need to change the practice due to increased worker mobility and competition from foreign firms.