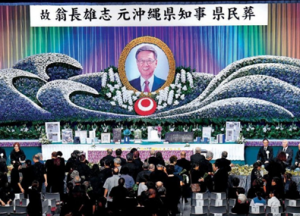 Okinawa Times and Ryukyu Shimpo reported extensively on a funeral for the late Governor Onaga sponsored by the Okinawa prefectural government in Naha City on Tuesday, noting that some 3,000 people, including central government officials, local politicians, businesspersons, and residents, took part in the event to bid a final farewell to the deceased leader. In remarks to the attendees, newly elected Governor Tamaki and other local officials vowed to uphold Onaga’s resolve to thwart the FRF construction off Camp Schwab. While reading aloud a message of tribute from Prime Minister Abe, Chief Cabinet Secretary Suga was jeered and heckled by participants who are displeased with the Abe administration’s policy of moving ahead with the Futenma relocation initiative. Ryukyu Shimpo explained that although Suga has been at the forefront of Tokyo’s efforts to reduce the base-hosting burden on Okinawa, he is also viewed very critically by Onaga’s supporters because he frequently clashed head on with Onaga over the Henoko plan. Okinawa Times added that despite its firm commitment to proceed with land reclamation off Camp Schwab, the central government is likely to take a soft approach toward Governor Tamaki at least for a while in view of the fact that he defeated his LDP-backed candidate by a wide margin in the gubernatorial race last month.