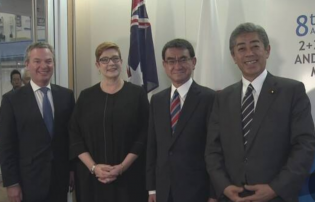 NHK reported at noon on a “2+2” meeting of foreign and defense ministers between Japan and Australia that began in Sydney this morning, saying that at the beginning of the meeting, Australian Foreign Minister Payne disclosed that a Japan-Australia summit is expected to be held in Darwin, Australia, in November. According to the network, Kono responded by saying that Australia is a “special and strategic partner that shares basic values and strategic interests” with Japan and expressed hope to work together to maintain and promote a free and open Indo-Pacific region based on rules. The network added that the ministers are expected to confirm close security cooperation between Japan, Australia, and the United States in light of China’s maritime advancement in the East and South China Seas.