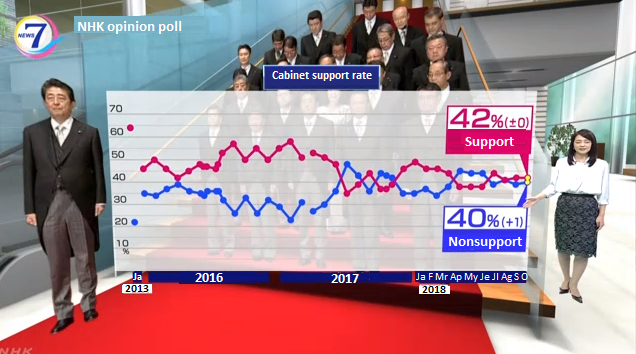 According to the NHK public opinion survey [for the month of October], 42% of pollees support the Abe cabinet, the same as the previous month. Those saying they do not support the cabinet rose by 1 point to reach 40%.

The nationwide survey was conducted by NHK from Oct. 6 over three days on a computer-aided random digit dialing (RDD) basis and targeted men and women aged 18 or over with calls placed to landline and mobile phone numbers. Valid responses were received from 1,271 of the 2,172 people polled. The valid response rate was 59%.

In the cabinet reshuffle, Prime Minister Shinzo Abe retained Deputy Prime Minister and Finance Minister Taro Aso. The opposition parties have criticized this, saying that Aso has not taken responsibility for the document falsification scandal. Some 17% of pollees said that they “approve” of this appointment, while 42% said they do not and 34% say they are “undecided.”

Prime Minister Abe has said he would like to accelerate debate within the LDP on constitutional amendments so that the LDP proposal can be submitted to the extraordinary Diet session, which will be convened at the end of this month. Asked if the draft should be submitted, 17% said “yes,” 36% said “there is no need to submit a proposal,” and 38% said they are “undecided.”

Asked for their views on explicitly stating the existence of the Self-Defense Forces while retaining Article 9, which states that Japan will never again maintain war potential, some 30% said they are “in favor” while 19% said they are “opposed” and 40% said they are “undecided.”