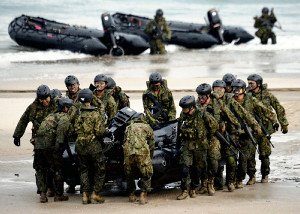 Yomiuri, Sankei, and Mainichi reported on Monday on ongoing joint exercises between the USMC and the GSDF on Tanegashima Island, Kagoshima, noting that the press was allowed to observe amphibious landing practice there on Sunday. Some 230 personnel from the two militaries participated in the training, which was based on the scenario of recapturing a remote island controlled by an enemy. The exercises will end on Oct. 19.

Meanwhile, Nikkei wrote that the SDF and the U.S. military carried out a “joint integrated disaster response drill” in Wakayama Prefecture on Sunday based on the scenario of a massive “Nankai Trough” earthquake hitting the region. About 30 U.S. personnel worked together with some 2,500 Japanese troops to simulate airlifting relief supplies and injured people. This was the fifth time for such a drill to be held.