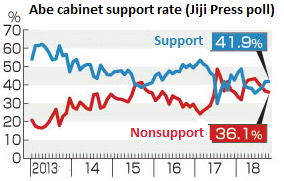 According to the October Jiji opinion poll conducted on Oct. 5–8, the approval rate for Prime Minister Shinzo Abe’s cabinet rose by 0.2 percentage points over the previous month to 41.9%. The disapproval rate dropped by 0.5 points to 36.1%. Prime Minister Shinzo Abe reshuffled his cabinet on Oct. 2, but it did not result in a bosltering of the administation as the cabinet support rate stayed essentially unchanged.

Asked if the negotiations for a Japan-Russia peace treaty should be promoted without resolving the issue of the Northern Territories, more people answered “no” than “yes,” at 47.5% to 37.4%. Russian President Vladimir Putin recently proposed to the Prime Minister that the two nations conclude a peace treaty without preconditions.The Japanese side is wary, however, as this runs counter to the government position, which is that a peace treaty will be concluded after the issue of territorial possession is resolved.

The survey was conducted [over the four-day period of Oct. 5–8] through individual interviews. For the survey, a total of 2,000 people were sampled from among men and women, aged 18 and over. The valid response rate was 62.6%.