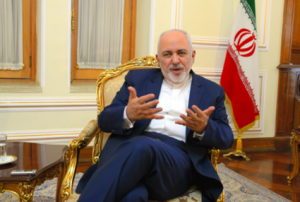 Asahi ran an interview with Iranian Foreign Minister Zariff, who commented on the U.S.’s planned reinstatement in November of sanctions, which he said “lacks legitimacy.” Speaking on the Trump administration’s demand for other countries to stop importing Iranian oil, the top Iranian diplomat stated: “[In asking Japan to suspend oil imports], the U.S. is pressing Japan to violate international law…. It’s like asking Japan to invade a foreign country.” The minister urged Tokyo to continue trading with Tehran.

Yomiuri also published an exclusive interview with the Iranian minister, who acknowledged that the Iranian economy has already been affected since some countries have decided to halt Iranian oil imports in response to U.S. pressure. While reiterating Tehran’s resolve to continue exporting petroleum, Zariff reportedly indicated that his country may leave the Joint Comprehensive Plan of Action, known commonly as the Iran nuclear deal, if the Iranian government’s ongoing attempts to coordinate with the EU, Russia, and China to secure petroleum trade run into difficulties.