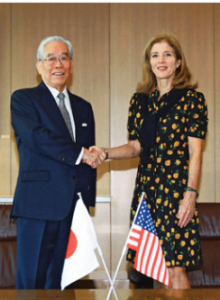 Former U.S. Ambassador to Japan Caroline Kennedy, 60, who will serve as an international adviser for the 30th Praemium Imperiale Cultural Awards from November, visited Fuji TV headquarters in Daiba, Tokyo on Oct. 29 to meet with Fuji-Sankei Group Chairman Hisashi Hieda, who chairs the Japan Art Association that presents the awards.

Kennedy met with Hieda for about 45 minutes. Hieda explained to her the selection criteria for the awards to honor “contributions transcending national and ethnical borders,” which were set when the awards first started. Kennedy answered that she “fully understood and concurred” with the rules. She also said: “I would like to listen carefully to the opinions of the other international advisers and make my best efforts. This meeting will serve as guidance for future activities.”

Kennedy served as the first female U.S. ambassador to Japan from 2013 to 2017. She is replacing another international adviser from the U.S., former Metropolitan Museum Art Director William Luaz, 89, and will be involved with recommending awardees from next year.