SEOUL — South Korea’s Supreme Court on Tuesday ordered a Japanese steelmaker to pay compensation of 100 million won ($88,000) each to four Koreans who were forced to work for the company during World War II.

The court said that Nippon Steel & Sumitomo Metal is liable for unpaid salaries to the laborers for their work between 1941 and 1943. It dismissed the company’s argument that Japan paid all necessary compensation in 1965 under a treaty signed by the two countries, ruling that it does apply to individual reparations.

The treaty normalized ties between the countries following 35 years of Japanese colonial rule in Korea (1910-1945). Japan argues that the issue of Koreans being forced to work for Japanese companies was resolved in that agreement.

The verdict could hurt shaky relations between Seoul and Tokyo, at a time when the neighbors are faced with the North Korea nuclear issue and the economic fallout of the U.S.-China trade war. Some analysts say the ruling could complicate operations for Japanese companies in South Korea.

“It is inevitable that this will tarnish trust between governments,” said Jin Chang-soo, a senior researcher at Sejong Institute, a private think tank. “It’s up to the South Korean government how it can manage this.”

The two countries have a bitter history. The governments are still at loggerheads over issues stemming from the Japanese military’s use of wartime “comfort women,” and are engaged in a long-running dispute of rocky islets in the Sea of Japan known as Takeshima in Japanese and Dokdo in Korean.

The workers originally filed their lawsuit with a district court in 2005. Tuesday’s ruling had been delayed for five years as the government of previous President Park Geun-hye is believed to have pressured the court to put off the ruling, fearing it could hurt relations with Tokyo. 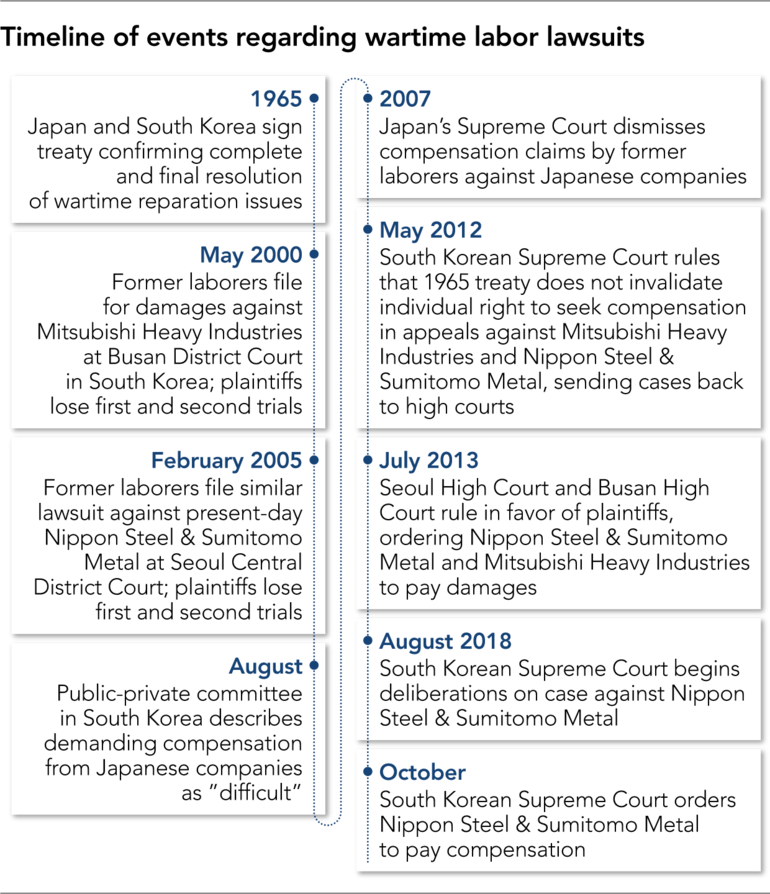