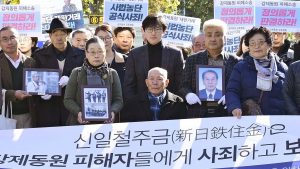 One of the victims of forced labor (center) and his supporters in front of Supreme Court in Seoul.

All national dailies gave top play to reports on a ruling handed down by South Korea’s Supreme Court ordering Nippon Steel & Sumitomo Metal Corp. to pay 100 million won (about $88,000) each to four South Koreans as compensation for forced labor during wartime. The Supreme Court dismissed the Japanese steelmaker’s appeal of a ruling handed down in 2013 by the Seoul High Court ordering the company to compensate the four South Koreans. The Japanese government has maintained the position that the issue of compensation was resolved “completely and finally” under a 1965 bilateral accord.

Prime Minister Abe told reporters that the ruling is inconceivable from the viewpoint of international law. The GOJ immediately lodged a protest, with Foreign Minister Kono summoning South Korean Ambassador Lee Su-hoon to the Foreign Ministry and saying the ruling clearly violates the 1965 bilateral agreement and could undermine the foundation of Japan-South Korean relations. Kono also urged the ROK government to take steps to prevent the ruling from resulting in unfair and detrimental treatment of Japanese firms and individuals. Yomiuri, Mainichi, and Sankei speculated that Tokyo may consider taking legal steps such as filing an appeal with the International Court of Justice if Seoul fails to take the necessary measures. Noting that the ruling could undermine the foundation of postwar relations between Japan and South Korea, the papers wrote that the GOJ is concerned that the issue could affect Japan-South Korea ties overall.

Nippon Steel & Sumitomo Metal released a comment saying that the ruling is very regrettable because it runs counter to the bilateral agreement. Keidanren and the other three major business organizations in Japan expressed concern about the ruling by saying: “We are deeply concerned that the ruling will hamper our investment and business activities in South Korea and damage bilateral economic relations with South Korea.” Nikkei wrote that the impact of the ruling may extend beyond Nippon Steel & Sumitomo Metal by putting approximately 70 Japanese companies, including Mitsubishi Heavy Industries, at risk of losing similar court cases in South Korea.

While saying that the government respects the court ruling, South Korean Prime Minister Lee Nak-yeon issued a statement saying that the Moon administration will take the necessary steps by consulting with relevant agencies and experts. Quoting Lee as saying in a statement that South Korea is hoping to develop its relations with Japan in a forward-looking manner, Mainichi conjectured that the comment indicates the ROK government’s desire to prevent the issue from having a serious impact on bilateral relations.