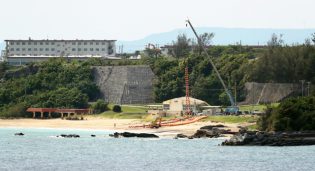 NHK reported online this morning that following the decision by Land Minister Ishii to temporarily suspend Okinawa’s retraction of its permission for landfill work in Henoko, the Okinawa Defense Bureau resumed work at the site this morning and began placing floats in the ocean to mark off-limits areas. The network said the resumption of landfill work despite Governor Tamaki’s call for a resolution of the issue through dialogue with the government is bound to intensify the conflict between the Okinawa and central governments. All commercial networks carried similar stories.