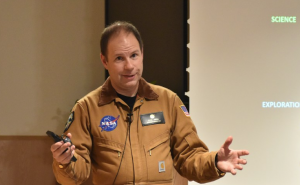 Mainichi reported online on a speech delivered in Tokyo on Tuesday by NASA scientist Paul Abell, who is involved in a project to collect samples from the asteroid Bennu by the OSIRIS Rex spacecraft. Dr. Abell discussed cooperation with JAXA’s Hayabusa2 near-Earth asteroid sample-return mission. The paper wrote that the scientist emphasized the merits of cooperation between NASA and JAXA by reportedly saying that the two space agencies will be able to achieve more scientific findings if they compare samples they collect because the asteroids they explore separately look exactly alike.