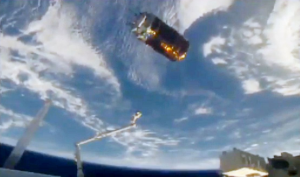 The Japanese Aerospace Exploration Agency said the cargo vessel, named white stork in Japanese, has been loaded with waste from the ISS and is scheduled to burn up in a controlled manner when it re-enters the Earth’s atmosphere on Sunday.

But, before burning up, it will eject a capsule containing protein crystals grown in experiments carried out on the space station.

Launched on Sept. 23 on an H-2B rocket from the Tanegashima Space Center in southwestern Japan, the vessel, formally called the H-II Transfer Vehicle-7, delivered some 6 tons of food, clothes and experiment supplies, including new lithium-ion battery cells, to the ISS that orbits some 400 kilometers above Earth.

The conical-shaped capsule measuring some 84 centimeters in width and 66 cm in height is expected to make a parachute-assisted splashdown in the Pacific near Japan’s far-east Minamitori Island on Sunday and be retrieved by a JAXA ship.

Previous models of the Kounotori transporters were unable to carry materials back to Earth unscathed by the heat generated during re-entry to the atmosphere.

The new capsule can withstand the extreme temperatures and keep samples inside cool using a vacuum insulated container covered by protective materials, according to JAXA.

It was jointly developed by JAXA and Tiger Corp., an Osaka-based home appliance maker known for producing vacuum insulation containers.

The successful re-entry and collection of samples are expected to contribute to Japan’s efforts toward the development of manned space missions in the future.

Japan has been holding tests at its own experiment module at the ISS named Kibo, meaning hope in Japanese, but it has required U.S. and Russian spacecraft to bring back samples produced.

JAXA’s dependence on other countries has meant it has no control over when samples can be collected. If Kounotori7 is successful on its seven-week journey, Japan will be able to transfer materials as needed.

It was feared the latest Japanese mission may be delayed by a manpower shortage following the failed launch in October of a Russian Soyuz rocket carrying astronauts and supplies to the ISS.

The two astronauts aboard the Soyuz ejected safety, but it meant the ISS was only left with three astronauts to perform experiments and carry out work outside the craft.