Second Lady calls for increased use of art therapy in Japan 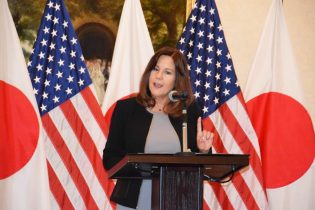 TV Asahi reported online on Tuesday afternoon that Karen Pence, the wife of Vice President Pence, delivered a speech at the Ambassador’s Residence in Tokyo earlier in the day to announce a U.S. Embassy grant worth about $55,540 (6.25 million yen) over the next two years to a new art therapy program slated to begin at Tsukuba University in April 2019. The network said art therapy is a widely used form of psychotherapy in the U.S. and Europe, adding that the Second Lady expressed hope that art therapy will also become widespread in Japan. The network said Prime Minister Abe’s wife, Akie, also attended the event and expressed hope that Japan and the U.S. will forge deeper ties in wider sectors. Sankei carried a similar story on Tuesday, quoting Mrs. Pence as saying: “Japanese people who want to learn art therapy have to study abroad….I hope that this program will become a model for other universities in Japan.” According to the paper, Mrs. Pence also introduced the story of a Marine who was able to recover from PTSD through art therapy, and stressed that there are many cases in which art therapy has changed people’s lives. The regional papers Hokkaido Shimbun and Saga Shimbun carried a similar Kyodo report.