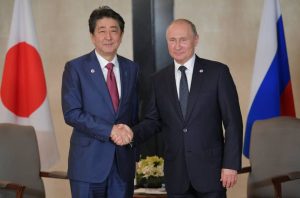 All national dailies gave extensive coverage to the Japan-Russia summit held yesterday in Singapore. Prime Minister Abe and President Putin forged a consensus on accelerating discussions on a bilateral peace treaty based on the 1956 Joint Declaration that ended the state of war between the Soviet Union and Japan, the reports said. As the declaration calls for the return of the smaller two of the four islands following the conclusion of a peace treaty, Asahi opined that the consensus reached between the two leaders indicates that Tokyo may change its policy and no longer demand the simultaneous reversion of all four disputed islands. While quoting an unnamed senior Abe administration official as saying “Russia is unlikely to return Kunashiri and Etrofu because many people live there,” the daily said Japan will probably seek the swift return of Shikotan and Habomai. Yomiuri said that although the premier apparently decided to prioritize the reversion of the two smaller islands, the GOJ will maintain its goal of realizing the simultaneous return of all four islands on the surface out of fear that the Abe administration would be criticized at home for giving up on the decades-long goal. Sankei claimed that Abe and Putin agreed to seal a peace treaty within three years.

Abe reportedly agreed to visit Russia early next year for another summit with Putin. A separate Abe-Putin meeting is also reportedly being arranged for Buenos Aires in late November or early December on the margins of the G20 summit. Abe told the press after the meeting: “President Putin and I share a strong commitment to settle without fail the outstanding issue that has been unresolved for the past 70 years and not pass it on to the next generation.” The dailies speculated that the Japanese leader is keen to resolve the territorial dispute before his term as LDP president expires in 2021 so as to leave a diplomatic legacy. Nikkei projected that public opinion in both nations will hold the key to the prospects for future negotiations on the return of the two smaller territories. Mainichi expressed skepticism about Russia’s enthusiasm for the upcoming territorial talks, pointing out that the Russians are distrustful of Japan because it has dismissed Moscow’s repeated calls for assurances that no U.S. bases would be established in the Northern Territories if Russia were to hand them over to Japan.