Cabinet support rate stays steady at 42%, slightly less than 30% of respondents are “in favor” of relocation to Henoko, Jiji Press poll 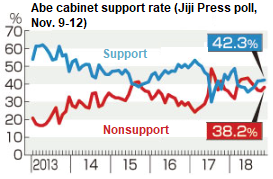 According to the November Jiji Press opinion poll conducted on Nov. 9–12, the approval rate for Prime Minister Shinzo Abe’s cabinet remained level, rising by 0.4 percentage points over the previous month to 42.3%. The disapproval rate rose by 2.1 points to 38.2%. There has been a series of scandals involving first-time members of the cabinet, including Minister of State for Regional Revitalization Satsuki Katayama and Minister in Charge of the Tokyo Olympic and Paralympic Games Yoshitaka Sakurada, but they seem to have had a limited impact on the cabinet support rate. There is also the possibility that the public approved of Prime Minister Shinzo Abe’s diplomatic initiatives, including paying a state visit to China for the first time in seven years as Japanese prime minister.

The government plans to promote the relocation of the U.S. military Futenma Air Station (Ginowan City, Okinawa) to the Henoko district of Nago City in the same prefecture even though Denny Tamaki won the September Okinawa gubernatorial election on a campaign platform of opposing the relocation. Some 36.4% of respondents said that they are “opposed” to this governmnet plan while 29.0% said they are “in favor” of it. Meanwhile, 34.6% said they are “undecided.”

The survey was conducted [over the four-day period of Nov. 9–12] through individual interviews. For the survey, a total of 2,000 people were sampled from among men and women, aged 18 and over. The valid response rate was 60.6%.