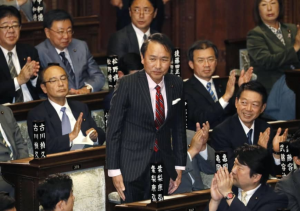 Yasuhiro Hanashi, chairman of the Lower House’s judiciary committee, stands up and thanks lawmakers of the ruling parties after a motion calling for his dismissal was voted down on Tuesday. | KYODO

In the latest political clash over a controversial immigration bill, the ruling parties on Tuesday voted down a motion calling for the dismissal of the head of the Lower House’s judiciary committee.

The motion was submitted last week against Chairman Yasuhiro Hanashi, a Liberal Democratic Party member, by the Constitutional Democratic Party of Japan in protest against his push for quick deliberations over revision of the immigration control act.

The LDP-Komeito ruling bloc is now trying to pass the bill through the chamber by Nov. 27, according to Hiroshi Moriyama, chairman of the LDP’s Diet Affairs Committee.

If enacted, the bill would create two new categories of working visas, which the government says would newly introduce about 345,000 blue-collar foreign workers to the nation in its first five years.

The Justice Ministry admitted Friday to multiple inaccuracies in a survey of foreign trainees who left their workplaces mainly due to low wages and bad working conditions. Opposition parties have called for more time to deliberate over the bill, although the ruling bloc is now trying to enact it by Dec. 10, when the current extraordinary Diet session ends.

Their motion succeeded in delaying deliberations on the proposed legislation at least by a few days, giving the government just under three weeks to arrange a final voting session for the bill during the current Diet session.

Members of the opposition parties have voiced concerns over allegedly dire working conditions and physical abuse of foreign workers who have come to Japan to participate in the Technical Intern Trainee Program.

In the survey report, the Justice Ministry made multiple errors on data regarding foreign trainees who had gone missing.

The report shows that “the Justice Ministry has been mistaken in its understanding of the issues in the foreign trainee system … and now (the government is) trying to create another new visa system based on the current program,” said CDP lawmaker Shiori Yamao at a news conference held Friday, adding that the very premise of the debate regarding the new immigration control law has been “turned on its head” because of the new data that came to light.