The Yomiuri Shimbun conducted a nationwide (mail-in) public opinion survey on the Heisei period targeting 3,000 voters age 18 or over. Asked what domestic event symbolizes the Heisei period (multiple responses permitted), 85% said the “Great East Japan Earthquake,” making it the most frequently given response. Next were the “Aum Shinrikyo incidents, including the subway sarin attack” at 74% and the “Great Hanshin Earthquake” at 72%. The top three events symbolizing the era were large-scale disasters and incidents.

Asked what change exerted a large impact on society (multiple responses permitted), 82% said “repeated large-scale disasters, including the Great East Japan Earthquake and the Great Hanshin Earthquake,” giving it the top ranking. This was followed by the “spread of the smartphone” at 66% and the “advancement of the Internet and other info-communications technology” at 62%.

Asked if the Heisei period were a good one or a bad one, some 68% said it was a “good era,” including those who said “generally good era.”

However, when asked to select from a list of 10 words the one that best matched their image of the Heisei era (multiple responses permitted), some 53% of respondents said “instability,” giving it the top ranking. Second was “stagnation” at 37%. These two beat out the third-placed “progress” (24%) and the fourth-placed “stability” (23%). These results are thought to reflect the repeated large-scale disasters and the economic doldrums following the burst of the bubble economy.

In the (interview-based) poll taken in January 1989 at the height of the bubble economy right after Heisei was introduced as the name of the new period, the responses to the same question were as follows: “stability,” 54%; and “bright,” 38%. It should be noted that the two surveys used different polling methodologies.

Polling methodology: The survey was implemented on a mail-in basis, with a total of 3,000 persons chosen from among all eligible voters age 18 or over throughout the country (at 250 locations on a stratified two-stage random-sampling basis). Questionnaires were sent out on Oct. 9 to those chosen for the survey, and completed forms were sent back by 2,054 persons by Nov. 19. Valid answers were obtained from 2,016 persons (67%), excluding answers from those not subject to the survey.

Note: Figures rounded off. The total percentage of numerical values in graphs and tables may not add up to 100%. “0” indicates that the figure was below 0.5%. 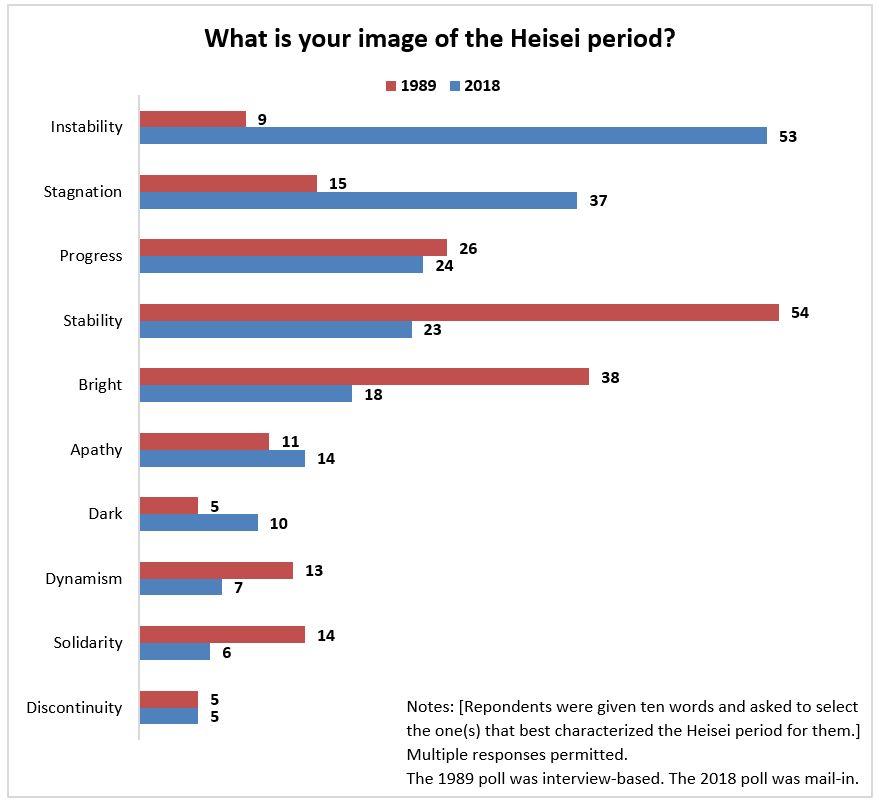 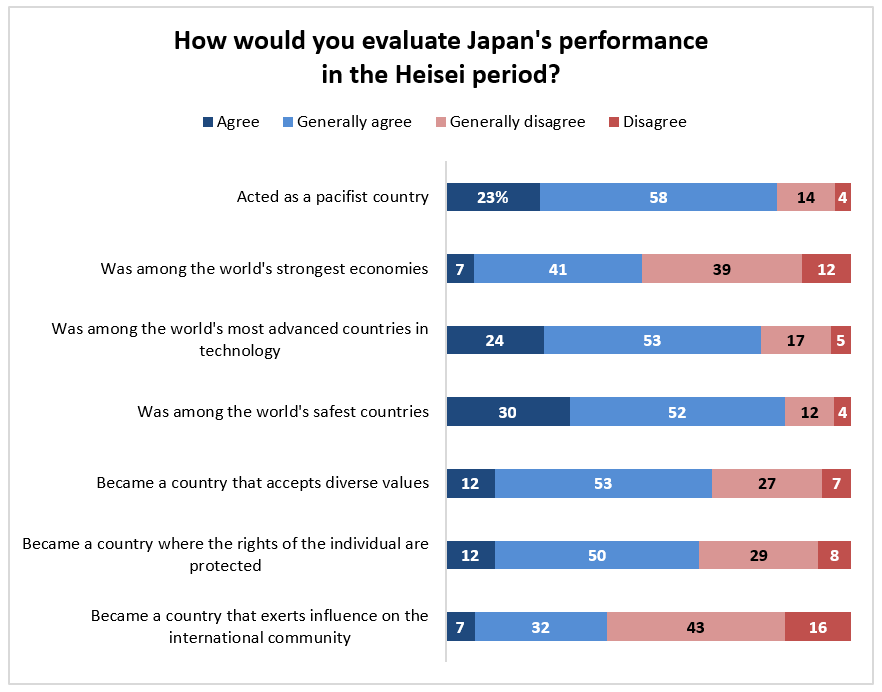