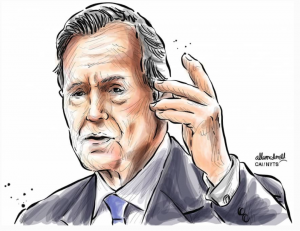 By Kuni Miyake, president of the Foreign Policy Institute and research director at Canon Institute for Global Studies.

On Nov. 30, George Herbert Walker Bush passed away at the age of 94. As in the case of U.S. Sen. John McCain three months ago, U.S. mainstream media carried, over the weekend, numerous special articles or programs to pay tribute to the 41st U.S. president as if they miss those good old days in American politics.

I watched CNN all day long. Many former advisers and Cabinet secretaries of the Bush administration made appearances. Former Gen. Colin Powell talked about the Gulf War. James Baker, the secretary of state, John Snunu, the chief of staff and Condoleezza Rice told unknown stories, warmly remembering the life of their former boss.

When I was posted in Washington as first secretary at the Japanese Embassy’s political section in 1991, Bush was in the White House. Although his popularity was declining, everybody loved the president and respected him. Press conferences were tense but never hostile. No correspondents were as belligerent as they are now.

When I arrived in Washington, people asked me whether the U.S. forces should have taken Baghdad, instead of just liberating Kuwait in the Persian Gulf War. As a Middle East hand involved in Japan’s massive programs to help the U.S. and other coalition forces in the region, I said, “No, it would have been a big mistake if you had done it.”

In fact, that was the judgment of Bush. His opponents said he should have invaded Iraq and removed President Saddam Hussein from power. The president did not buy the idea since it would have “incurred incalculable human and political costs” by occupying and ruling Iraq. Bush was perfectly right, but that was exactly what his son did in 2003.

Bush was a man of service to his country and knew firsthand how soldiers die in military action. Enrolling in the U.S. Navy when he turned 18, he served as a pilot in the Pacific War. He subsequently served as congressman, as an envoy to China, as director of the CIA, as vice president and as president of the United States, making him the commander in chief. No other presidents have served the nation like he did.

Bush was a man of decency. Reflecting on the past three decades since I got involved in Japan-U.S. relations, I believe Bush was the last president of the GOP (Grand Old Party) who pursued bipartisan politics with a sense of “noblesse oblige.” The Republican Party, now taken over by President Donald Trump, is not “grand and old” anymore.

Bush may have been partially responsible for this. He broke his campaign promise and raised taxes, but did not know how barcodes work at supermarkets. His other-worldly elitism alienated many Republicans and Democrats. Presidents after him, unfortunately, seem to have been trapped by polarized politics.

The loss of Bush symbolizes the end to the era of elite statesmanship. Americans have become so divided and diversified that their representatives in Congress and the White House cannot properly serve the nation. The Trump administration is just another example of America’s deteriorated government.

Honestly speaking, I had originally planned to write a piece about the outcome of the U.S.-China meeting in Buenos Aires. However, the two leaders, as many could easily predict, just declared a truce to the “trade war” without reaching any substantive agreement for China to change its economic and political system.

The statement of the White House press secretary said, “China agreed to designate Fentanyl as a Controlled Substance” which “will be subject to China’s maximum penalty under the law.” The U.S. side will not raise the 10 percent tariff on $200 billion worth of Chinese imports to 25 percent for 90 days beginning on Jan. 1, 2019.

The statement continued that China not only agreed to buy American agricultural products immediately but also “will agree to purchase a not yet agreed upon, but very substantial, amount of agricultural, energy, industrial and other product from the U.S. to reduce the trade imbalance.” So, is it significant? Hardly.

The two leaders also “agreed to immediately begin negotiations on structural changes with respect to forced technology transfer, intellectual property protection, non-tariff barriers, cyber intrusions and cyber theft, services and agriculture,” and unless an agreement is reached within the next 90 days, the 10 percent tariffs will be raised to 25 percent.”

Was it an “amazing and productive meeting,” as Trump said? Washington virtually sent an ultimatum with so many conditions that Beijing cannot accommodate. I wonder if the Chinese will eventually find it useless to negotiate and ultimately go it their way. This may further erode today’s free and open politico-economic world order.

In the spring of 1989, I was an officer at the Foreign Ministry’s North America Bureau in charge of the “FSX” program in which Japan and the U.S. jointly developed the next generation of Japan’s fighter-support aircraft. To our surprise, the U.S. Congress interfered at the last minute in this infamous “techno-trade” dispute between the two allies.

Then U.S. Secretary of State James Baker was coordinating with the U.S. Senate. It took us a few months to reach a final agreement on the issue. It was unfortunate that Baker could be a very nasty negotiator. Nonetheless, Bush still believed that “Politics need not be nasty.” That was in the late 1980s.

On Sept. 11, 1990, a month after Saddam’s Iraq invaded Kuwait, Bush delivered a speech titled “Toward a New World Order” to the joint session of Congress. Below are my favorite lines in the speech.

The current president of the U.S. would never talk like this.

Do we really have to say goodbye to those good old American politics now that Bush is gone? Or is there still hope that someday America’s gentle, kind, honest and decent politics, no matter how nasty it may be, will return? Let’s keep our fingers crossed and wait for the day to come.