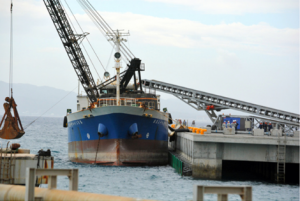 Sand for landfill being loaded onto cargo ship at a Nago port.

All national dailies reported on a GOJ decision to begin pouring earth into the FRF site in waters off Henoko on Dec. 14, saying that soil for landfill was loaded onto a cargo ship yesterday at a newly built pier owned by a commercial firm in Nago for shipment to the construction site. Okinawa reportedly reacted sharply to the plan, with Governor Tamaki telling the press: “Prime Minister Abe has said he is sympathetic to Okinawa. It is truly regrettable that the central government has decided to conduct landfill operations right after we held consultations.” The Okinawa prefectural government is expected to instruct to the company to forego the loading operation on the grounds that it failed to notify the prefectural government of the completion of the pier construction work.

Asahi explained that the GOJ chose to use the commercial port for shipping earth because the municipal government of Motobu refused to allow the Defense Ministry to use its pier as originally planned. The central government was reportedly determined to start the landfill work this year based on the assessment that if it were delayed until next year, it would have adverse effects on the planned prefecture-wide referendum on Futenma relocation on Feb. 24, a series of municipal elections in the island prefecture, a special April by-election to fill a Lower House seat vacated by Governor Tamaki, and the Upper House election in the summer. The administration is reportedly hoping that public and opposition bloc criticism of the landfill work will fade over New Year holiday season.