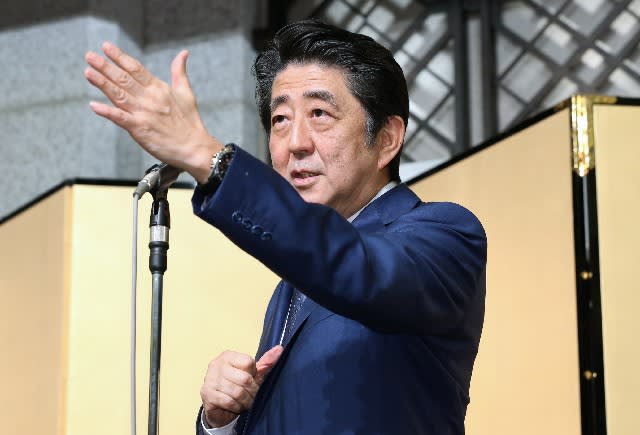 Japanese Prime Minister Shinzo Abe speaks at an annual gathering of economists hosted by Nikkei in Tokyo on Dec. 5. (Photo by Kosaku Mimura)

TOKYO — Japanese Prime Minister Shinzo Abe on Wednesday said he aims to “build a strong economy that is not influenced by international economic conditions,” in a sign of caution over the outlook for U.S.-China trade negotiations.

Speaking at an annual gathering of economists hosted by Nikkei in Tokyo, Abe said, “The [U.S.-China] trade war is in a ceasefire for 90 days, but it will end next year.” He also said that Japan will “definitely need to respond” when the period ends. He did not comment on his own trade talks with the administration of U.S. President Donald Trump, which are scheduled to start as early as January.

The developments come at a sensitive time for the Japanese economy. The government is set to raise the consumption tax rate from 8% to 10% in October, raising concerns about a cool-down in domestic consumption. Abe said he is planning to roll out economic policies that will “deflect back” the impacts of the tax hike.

Regarding the current sluggish consumer prices, Abe chuckled as he said the government will “work together with the Bank of Japan to achieve the inflation target,” as BOJ Gov. Haruhiko Kuroda looked on.

The 11-member Trans-Pacific Partnership agreement is set to come into effect at the end of the year. Abe said Japan will also seek an “early issuance” of the Japan-European Union Economic Partnership Agreement in an effort to “lead free trade.”