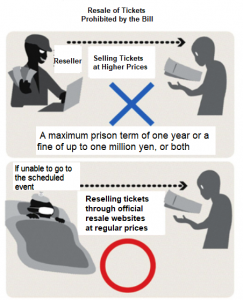 A bill to prohibit the resale of tickets for live concerts or sport events at higher prices was passed unanimously at the plenary session of the House of Representatives on Dec. 4. The bill, after being deliberated on in the House of Councillors, is expected to become law during the current Diet session. Bearing in mind the 2020 Tokyo Olympic and Paralympic Games, a cross-party group of lawmakers drew up the bill. Concerned people hope the bill will prevent substantial increases in the prices of  tickets for popular concerts or sport events.

“A legal restriction on reselling tickets is the best way,” emphasized Chairman Takeo Nakanishi of “All Japan Concert & Live Entertainment Promoters Conference” at the forum for thinking the resale of tickets at higher prices held on Nov. 7 in Tokyo. The conference is composed of concert promoters and others.

In May, “e+,” a leading ticket sales company (located in Tokyo), conducted a survey disclosing that in some cases, more than 90% of applications for tickets were made through ticket resale businesses using computerized automatic programs on the Internet. For example, 2,000 tickets out of 6,000 were resold at higher prices for a  concert to support the reconstruction of communities hit by the 2011 Great East Japan Earthquake. In another case, 100 tickets were resold at prices higher than 500,000 yen per seat for an animated cartoon-related concert. These cases make it difficult for the general public to purchase tickets. Resale of tickets is prevalent on auction websites.

The event-promotion industry has wrestled with this problem for more than ten years. There was even a case that all tickets were “sold out” for a concert; however, on the day of the concert, there were many empty seats in the same section of the venue because of the failure of resell the tickets. Atsushi Ishikawa, in charge of general affairs of the promoters conference, pointed out, “Once customers pay an unreasonably higher price for a concert, they tend to give up on buying a ticket for another concert.” The industry took a countermeasure against the resale of tickets by conducting an identification check of customers at venues; however, this led to punishing customers who bought tickets rather than the resale businesses, according to Ishikawa. The event-promotion industry, therefore, has been unable to take effective measures against the resale of tickets.

On the assumption that tickets for concerts and sport events are the target of scalping, the bill contains the provision of “specified entertainment admission ticket.” The provision prohibits the illegal resale of admission tickets that satisfy such conditions as “a clear statement at the time of sale that the transfer of the ticket for profit without the consent of the event promoter is prohibited” and “the designation of date and place of the entertainment event and the qualification of admission.” Offenders who resell a large number of tickets could be punished with a maximum prison term of one year or a fine of up to one million yen, or both.

In the meantime, the music industry has taken a measure to establish an industry-approved website for the secondary sale of tickets. It is called “Chiketore” (ticket trade). In the event that ticket purchasers can’t attend a scheduled concert due to medical or other reasons, the system allows such purchasers to resell their tickets at regular prices. “If the resale of tickets for the Tokyo Olympic games or other events at higher prices becomes rampant, it would be shameful for Japan as the host country from the viewpoint of the international community,” said Chairman Nakanishi at the forum,” calling for the application of the new legislation to the major international event.