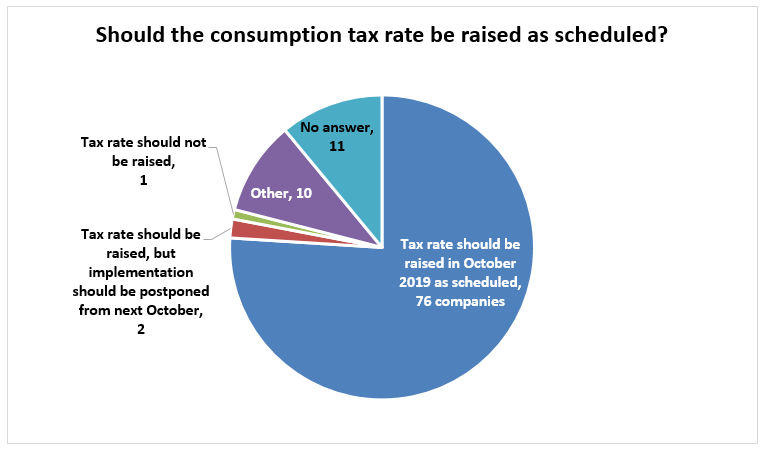 Many respondents said that both measures to build sound finances and measures to prevent a negative impact on the economy should be taken. Mitsubishi Estate Senior Executive Officer Hiroshi Katayama says, “[The consumption tax hike] is unavoidable from the standpoint of public finances, but economic countermeasures should be taken at the same time. I would like to see the government take all conceivable measures.”

The survey revealed that companies are in different stages of preparation for the reduced tax rate, which will leave the consumption tax levied on food and the like unchanged [at 8%].

FamilyMart UNY Holdings President Koji Takayanagi says, “It is very hard to understand [what is required]. The labor shortage is growing worse, and this is a burden on shop worker morale.”

[Polling methodology: [The survey was conducted of 100 leading Japanese companies nationwide from Nov. 12–22, 2018. Some 98 companies responded. Interviews were conducted with top executives at 40% of those 100 companies.] Some companies did not answer some questions so the total number of companies does not total to 98 for each question. Questions and answers have been abbreviated in some cases.]