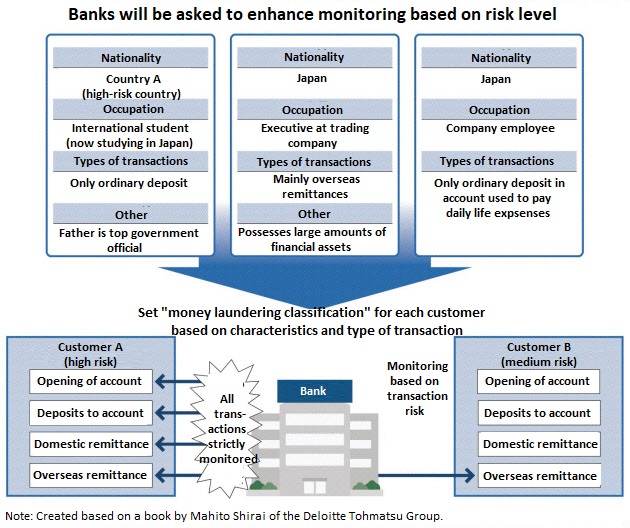 Banks will classify all customers based on risk of money laundering. They will categorize customers into approximately three categories and request businesspersons involved in importing/exporting and other high-risk customers to submit documents indicating the purpose and type of transaction for each remittance. The aim is to ascertain “who is actually making transactions.” The Financial Services Agency (FSA) will request the introduction of such a system to plug the loopholes in measures to counter money laundering, and the plan is to make the request of all financial institutions over the next few years. It looks like there will be more cases where it will be hard for users to make bank deposits and remittances.

In the autumn of 2019, the Financial Action Task Force (FATF), the international organization that reviews measures to combat money laundering and terrorist financing, will examine the status of Japan’s efforts [to address money laundering], including those of financial institutions. Based on an [earlier] request from the FATF, the FSA will raise the level of Japan’s money-laundering countermeasures. The FSA will first request megabanks to develop their customer-classification system as soon as possible. Over the next few years, it will urge all financial institutions, including local financial institutions, to do the same.

Banks classify borrowers into such categories as “normal customers” or “customers at risk of bankruptcy” depending on their financial condition. The lower the category, the larger the bad debt reserve set up against default is and the closer the customer’s management situation is monitored. The FSA will do the same for money-laundering measures: monitoring will be enhanced by categorizing customers into approximately three levels of risk.

For example, companies and solopreneurs that have trade dealings with the Middle East and frequently make overseas remittances will be categorized as “high risk.” International students will be rated as “medium risk,” and average individuals who are not engaged in business will be classified as “low risk.” Banks will be asked to classify all customers, both new and existing ones, based on their characteristics and types of transactions.

In the case of high-risk customers, it will be possible for banks to conduct detailed inspections to check for any suspicious elements in the case that such a customer performs a transaction, such as opening a bank account, depositing funds into an account, making a domestic remittance, or executing an international remittance. As for remittances related to trade transactions, the banks will request the customer to present the business contract so that they can check what type of transaction is actually being done.

In some money-laundering cases, a product valued at 1 million yen is purchased for 200,000 yen and the remaining 800,000 yen is received illegally. For this reason, it will be possible to conduct detailed investigations of transactions by high-risk customers to examine whether the amount remitted is appropriate for the transaction in question. In addition, financial institutions will be asked every year to verify whether there has been a change in those who actually manage the company.

At their overseas operations, the three megabanks already classify their customers based on the risk of money laundering. They will be asked to introduce these methods in Japan, as well.

Average individuals, called “non-business individuals,” will be classified as “low risk” in principle. If they make even one overseas remittance, however, their ranking will be raised to “medium” and they will be monitored more strictly. Beefing up measures to combat money laundering has an inverse relationship with customer convenience. Even in the case of an average customer wanting to remit funds, there is a chance they will be asked detailed questions by their bank and denied permission to remit money over a certain amount.

In the previous review conducted by the FATF in 2008, Japan was criticized for having “inadequate legal provisions” and the nation has been regarded as “lenient in addressing money laundering.” In its [2019] review, the FATF will look at how well Japan has created a framework to prevent money laundering based on an assessment of risk level and how effectively the system is functioning. Japan aims to clear its name by building a framework that provides continuous monitoring based on the classification of customers by level of risk.