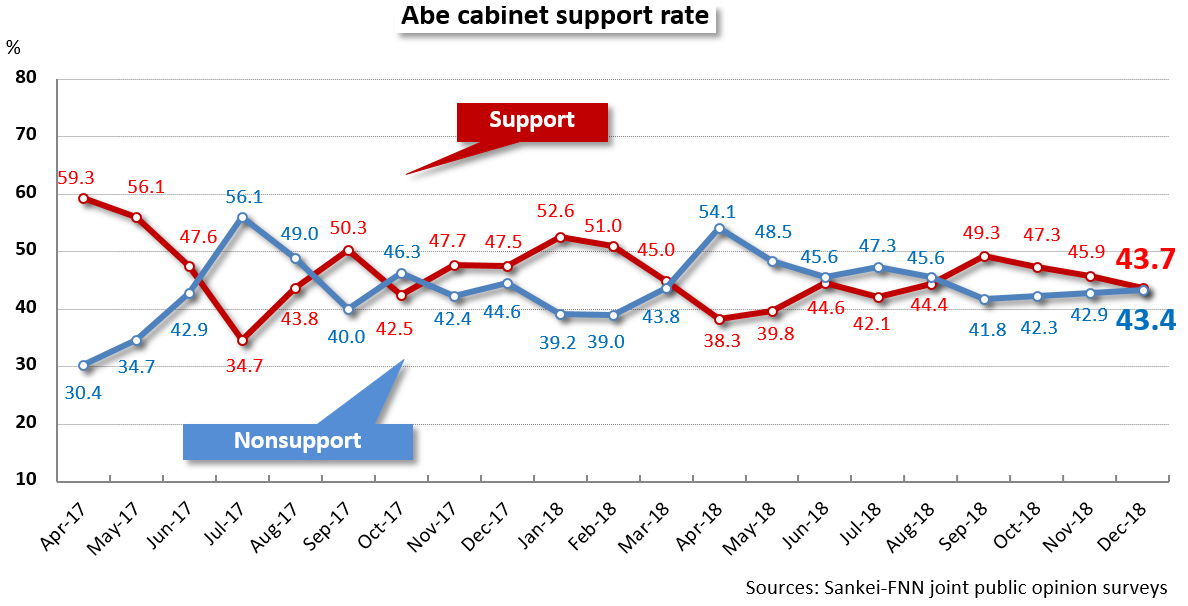 The 197th extraordinary session of the Diet closed on Dec. 10. In the nationwide public opinion poll conducted jointly by the Sankei Shimbun and Fuji News Network (FNN) on Dec. 8–9, respondents were split on their views of the cabinet. The cabinet support rate was 43.7%, down for the third consecutive month, and the nonsupport rate was 43.4%. These results may have been influenced by the impression that the government and Liberal Democratic Party (LDP) strong-armed the Diet regarding constitutional amendment and the enactment of the bill to revise the Immigration Control and Refugee Recognition Act to increase the number of foreign workers.

Conservatives among others were cautious about increasing the number of foreign workers in Japan. In the poll, 33.4% of cabinet supporters and 36.5% of Liberal Democratic Party (LDP) supporters said they are opposed to accepting more foreign workers.

“[The revision of immigration legislation] is an urgent issue as the labor shortage is growing more serious,” Chief Cabinet Secretary Yoshihide Suga has said, and the government and LDP rushed to have the bill passed during the extraordinary session. However, 54.5% of cabinet supporters and 56.1% of LDP supporters said in the poll that “there was no need to set the deadline of passing the bill during the extraordinary Diet session.”

Regarding constitutional amendment, the Prime Minister had expressed the intent to submit the LDP proposal of constitutional revisions to the extraordinary Diet session. From the start, however, the major opposition parties were opposed to the submission of the LDP proposal during the session. Hakubun Shimomura, chairperson of the LDP Headquarters for the Promotion of Revision of the Constitution, further complicated things by criticizing the opposition parties’ passive stance as “desertion of post.” As a result, the submission of the proposal was postponed until next year.

In the opinion poll, 35.2% of cabinet supporters and 35.7% of LDP supporters said it was “good” that the LDP proposal was not submitted to the Diet session. Even supporters are split over this issue.

Regarding the government’s plan to relocate the U.S. military’s Futenma Air Station (Ginowan City, Okinawa) to the Henoko district of Nago City, 58.3% of all respondents said that “the will of Okinawans should be given priority.” Among LDP supporters, however, some 51.6% said that “the will of Japanese people as expressed in national elections should be prioritized.”

Asked about the timing of the announcement of the new era name with the ascension of His Imperial Highness the Crown Prince to the Chrysanthemum Throne on May 1 next year, 37.0% of LDP supporters said that “the name should be announced on May 1,” which is higher than the 30.4% found in the poll overall. As he heads toward the Upper House elections next summer, the Prime Minister will face a tough situation running the administration.

[Polling methodology: The survey was conducted until the calculated number of responses was obtained by placing telephone calls on a random digit dialing (RDD) basis adjusted to the gender and age composition of each survey area. A total of 1,000 men and women, aged 18 and over, across the nation were surveyed. The survey was conducted on Dec. 8–9, 2018.] 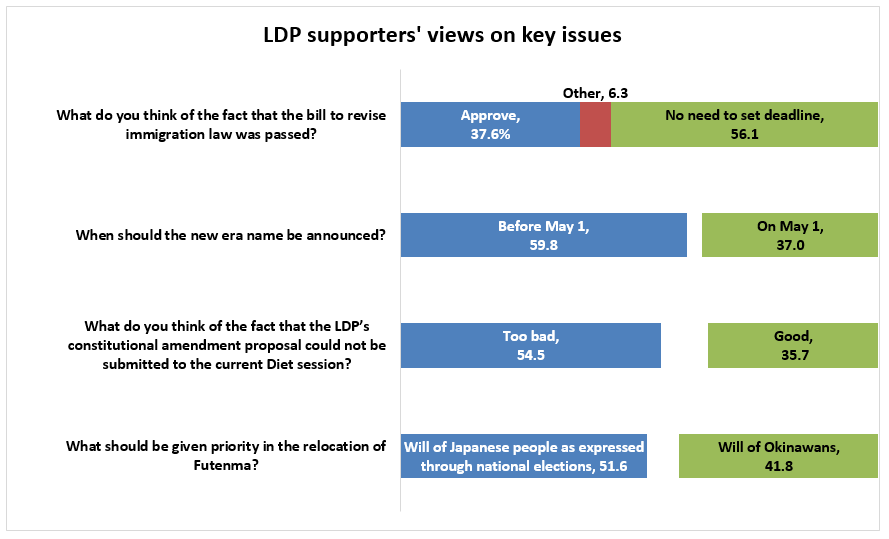