In an about-face, museums welcome shutter-bugs and conversationalists

Outbursts of delight and surprise reverberated among visitors to an exhibition called “Seeing and Believing” (right) at the Mori Art Museum in Roppongi. While chatting is generally frowned upon at museums in Japan because it is said to ruin the experience for other visitors, the museum announced that visitors were permitted to ooh and aah without hesitation for this exhibition, which featured installations and videos by Argentinian contemporary artist Leandro Erlich. Visitors were reportedly delighted not only by the innovative artworks that employed optical illusions and sound effects, but also the fact that they were not constrained by the conventional view that conversation has no place in the gallery. The exhibition attracted a record number of almost 610,000 spectators during its five-month run that ended in the spring.

According to Asahi (4/19), Nikkei (6/20), and Mainichi (2017/12/13), lately some Japanese museums have broken with tradition to condone or even encourage visitors on selected days to engage in audible conversations with their companions in front of the artwork. This is a bold move in the Japanese art world, where silence is the accepted etiquette. “Ordinary Japanese perhaps view museums and art galleries as ‘sacred places’ similar to shrines and temples where 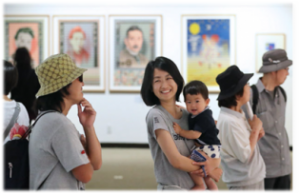 visitors hope to receive divine favor in return for offering silent prayer,” says Yutaka Mino, the director of Hyogo Prefectural Museum of Art. The Harvard-educated expert explains that lively conversations often take place in museum galleries in North America, including the Art Institute of Chicago and Montreal Museum of Fine Arts, where he used to work as the director of Oriental Art. “Teachers give on-the-spot lectures to students on paintings and sculptures in museums overseas. Galleries are usually regarded abroad as places to learn about history and culture.” Other curators similarly underscore that it is not surprising that great works inspire people to engage in impromptu conversations. “Guests are able to appreciate different aspects of the artwork by talking about their impressions and the pleasure it gives them as well as by asking each other questions about the artwork while viewing it,” says Masatomo Kawai, Director of Chiba City Museum of Art. “Although visitors should never disturb each other, they have a right to express their wonder when looking at masterpieces.” Kawai’s facility organizes “talk days” periodically so that its guests do not have hold their tongues or wait to discuss their impressions in the lobby café after viewing an exhibition.

Meanwhile, Sankei (7/19) and NTV (6/2) reported that some galleries nowadays allow visitors to take photos of selected pieces so that they can share the joy of witnessing great works of art with family members, friends, and even strangers by posting the images on social media. The museum operators reportedly permit photography in the hope that it will help to draw more visitors by tempting them to go and see the objects firsthand after learning that the images have gone viral. 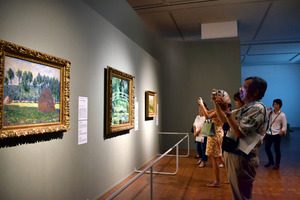 Photography is prohibited in most museums primarily due to concerns about copyright protection. But art historian Sadahiro Suzuki of Ochanomizu University explains that the conventional belief among Japanese that one should enjoy art by simply “gazing at it in silence” was shaped by prominent novelists and art critics in the Taisho era, such as Saneatsu Mushanokoji. A curator with Yokohama Museum of Art expresses the view that images of artwork posted on social media can serve as platforms for virtual tours of galleries for those who cannot visit them. Some museum operators, however, have mixed feelings about allowing photography in galleries. As some visitors to the Yokohama museum appeared to be busier snapping pictures than viewing Rodin’s masterpiece “The Kiss,” which was exhibited there for the first time ever in Japan earlier this year, Sankei took up a comment by a museum official who said: “They came to take pictures of the art instead of to look at it.” Museum administrators are also reportedly having a hard time striking a balance between advocates for allowing visitors to converse and take photos in galleries and those who favor silence and complain that the snap of shutters and other noises are bothersome even during official gallery tours by professional docents.