Tattoos are unfading, but not the taboo against them in Japan

There was a time in Japan when you didn’t see tattoos outside of yakuza movies. But the Japanese are getting used to seeing inked arms and legs, torsos and necks in public due partly to the influx of foreign tourists.

When popular TV personality Ryucheru (below) posted photos of his tattoos on social media on Aug. 21, however, he sparked a public controversy. He posted a message saying that he had tattooed the names of his wife and his newborn son on his arms. While many of his fans welcomed this, other people posted negative comments, such as: “What a shame!” and “You’ll now be asked less often to appear on TV.” Ryucheru shot back: “Why is there so much prejudice in this society? Instead of just putting up with it, I want to change it.” Ryucheru was born in 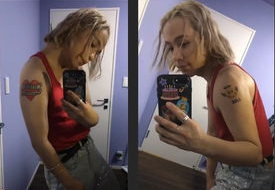 Okinawa and his father is a U.S. military service member. He explained that his father had a tattoo of a dragon on his back, but he didn’t think it was offensive. He wrote that he has no plans to hide or flaunt his tatts. He just wants to be himself.

Asahi (9/4) wrote that Japanese retain a deep-rooted aversion to tattoos. According to a 2014 survey conducted by a lawyer group in the Kanto region targeting 1,000 people aged 20 to 60, 51.1% of respondents said tattoos turn them off. Moreover, 81.4% said they are opposed to the idea of their family members getting tattoos. According to Tsuru University Professor Yoshimi Yamamoto, the author of “The World of Irezumi,” tattoos have been common around the world since before Christ, and that it is recorded in the Chinese history book Gishiwajinden (The Record of Japan in the History of Wei) that all Japanese men tattoo their faces. According to Yamamoto, many craftsmen in the Edo Period (1603-1868) had tattoos, and tattoos 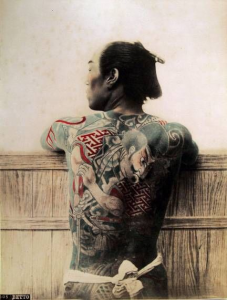 were used to brand criminals. It was not until the Meiji Era (1868-1912), with the enactment of a law forbidding people from getting tattooed, that tattoos became viewed negatively. While there is no longer any law against tattoos in Japan today, former Osaka Mayor Toru Hashimoto caused a controversy in 2012 when he conducted a survey of all Osaka City officials to see whether or not they had tattoos. When two Osaka city officials filed a suit over their punishment for refusal to participate, the Supreme Court ruled it was justifiable to survey city officials for the purpose of checking whether their tattoos were visible to the public.

According to Yamamoto, however, perceptions of tattoos are changing, especially among the young generation. While 55.7% of respondents in the aforementioned survey said tattoos remind them of “criminals,” 38% of those in their 20s associated tattoos with “art and fashion.” Yamamoto says: “Globalization will usher in more diverse values. I hope that we will overcome this commotion [over Ryucheru’s tattoos] and Japan will become a more inclusive society.”

In Japan, it is not unusual for gyms, hot spring resorts, and public baths to refuse entry to inked patrons. In fact, according to a survey taken by the Japan Tourist Agency in 2015, 56% of such facilities said they would not allow customers with tattoos to enter. Japan will host the Rugby World Cup next year. Recently, foreign players were asked by Rugby World Cup 2019 Organizing Committee to cover up their tattoos when they use public gyms or swimming pools in Japan. While some facilities are beginning to accept customers with tatts as long as they cover them up, scientist Kenichiro Mogi tweeted on Aug. 24 that public baths and pools’ rejection of customers with tattoos is “discrimination that needs to be eliminated” and that since the number of inbound tourists is on the rise, leaving the problem unaddressed will become an “international embarrassment” for Japan. Tokyo will host the Olympics in 2020 and Osaka will host the World Expo in 2025. Will the taboo against tattoos in Japan finally fade away? It may take a while, but Japan may well be heading in that direction.